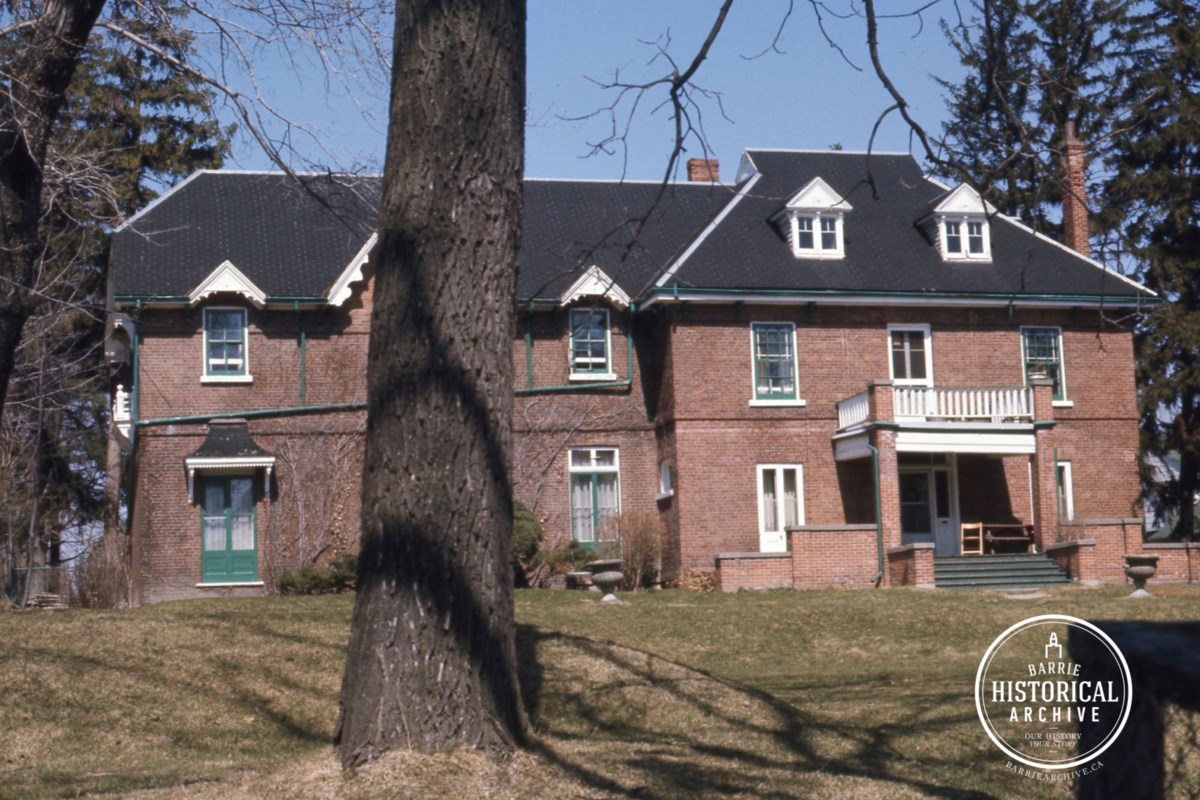 Built in the 1860s, it was once the home of millionaire William H. Wright, who died there in 1951

This ongoing series from Barrie Historical Archives Curator Deb Exel shows old photos from the collection and one from today, along with the story behind them.

With its sprawling and mixed architectural style, Statenborough, located at 55 Peel Street, is another Wellington Street Ridge mansion that still stands, along with its neighbors Ardtrea and Carnoevar.

It was built in the 1860s for Henry RA Boys, who was Simcoe County Treasurer. Boys was replaced by Assistant Treasurer Sidney M. Sanford in 1884. Sanford did not remain in office very long: he died the following year. His son Sidney James Sanford bought Statenborough in 1886.

Jim Sanford enlarged the house by adding a wing to the west side of the house to host a ballroom. Jim was also responsible for the construction of Barrie’s Grand Opera in 1895. He had some trouble with funding his initiatives and moved to South America. My colleague Mary Harris details her escapades in Part 1 and Part 2 here.

Statenborough was also the home of millionaire William H. Wright.

Wright was born in 1876, in Sleaford, Lincolnshire, England. At 21, he joined the British Army, surviving the Siege of Ladysmith during the Boer War from 1899 to 1902.

In 1907 he joined his sister Frances and her husband, Ed Hargreaves, in northern Ontario. Later moving to Cobalt, the two men attempted prospecting, discovering gold in 1911. The claims they staked became the heart of three large mines.

Although almost 40 years old (and wealthy), Wright enlisted in the Canadian Army in 1916 and served overseas until the end of the war, refusing several ongoing promotions. road. He later returned north and made the Wright-Hargreaves gold mine one of Canada’s first mines, operating from 1921 to 1965.

When the Hargreaves lost their home in Haileybury to a fire, Wright bought Statenborough for the two families to live there.

Shortly after purchasing Statenborough in 1922, Wright purchased the Brookdale farm from the Dyment family. A racetrack, located on 47 acres west of rue Anne between Victoria and Brock streets, was the site of the 1873 Queen’s Plate, held in Barrie that year on July 1.

Nathaniel Dyment then purchased the track for training from his Brookdale stables, until Wright took over the farm in 1925.

A fire in 1949 destroyed the stable where the five Barrie King’s Plate winners were bred. Later, in 1953, the land where the former Dyment / Wright farmhouse once stood was annexed to the Township of Vespra to become part of Barrie.

Along with his successes in mining and racing, Wright founded the Globe and Mail newspaper in 1936. He continued to support the community in which he lived through his generous donations to the Royal Victoria Hospital and the Barrie Arena.

Urban legend has it that, despite his wealth, Wright always kept a backpack and a prospecting kit handy: if he lost everything, he was ready to return to the bush.

William Wright died in 1951 in Statenborough.

What life was like 50 years ago in America, compared to now in 2022