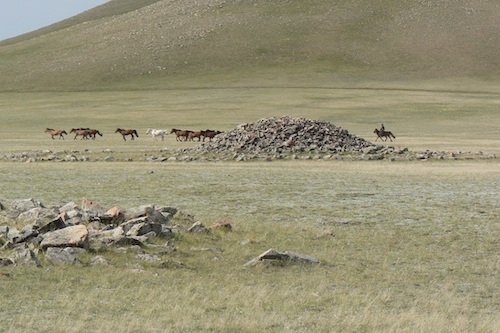 Dr. Jean-Luc Houle, an associate professor of anthropology in the Department of Folk Studies and Anthropology at WKU, is teaming up with researchers from the Max Planck Institute for the Science of Human History in Germany to study early domestic livestock dispersals across Central and Inner Asia from around 5,000 years ago. Other collaborators are affiliated with the National Museum of Mongolia.

Sheep, goats and domestic cattle were essential to the economy of the mobile herding communities that lived on the vast Asian steppe as early as the Bronze Age. Not only were meat and milk key components of the diet, but hides, wool, and bones were used for tools, shelter, and other purposes. Today, nomadic pastoralism continues to be the predominant way of life in this region.

The multi-year collaborative research projects involve radiocarbon dating and analysis of genetic material from the bones and teeth of sheep, goats and domestic cattle from archaeological sites in Mongolia and neighboring countries where Dr Houle and other archaeologists worked for several decades. These data can indicate when and where animal species were domesticated, and when and where domesticated livestock spread to other regions. Researchers are also interested in how the genetic makeup of livestock populations has changed over time and the evolutionary processes involved, as well as the genomics of pathogens associated with domestic animals.

The Max Planck Institute for the Science of Human History (MPI-SHH) in Jena, Germany, was founded in 2014 to target fundamental questions of human history and evolution over the last millions of years. years. It currently consists of three interdisciplinary research departments that integrate research methods and questions from the natural sciences and the humanities: the Department of Archaeology, the Department of Archaeogenetics, and the Department of Linguistic and Cultural Evolution. MPI-SHH affiliates explore major questions of the human past, such as the history of global human migrations, human modifications of ecosystems, and the impacts of environmental change on humans. MPI-SHH is one of 86 institutes of the Max Planck Society for the Advancement of Science, an independent, non-profit research organization founded in 1948 as a successor to the Kaiser Wilhelm Society, established in 1911.

The National Museum of Mongolia (NMM) preserves and promotes the rich cultural heritage of a nomadic way of life as it was lived for millennia by the ancestors of Mongolia, who left an indelible mark on Mongolia and on the history of the world. Through collections displayed in nine permanent exhibition halls and virtual tours and experiences, the museum connects past and present to provide a memorable, informative and inspiring journey through Mongolia.

Should the military put an end to the “freedom” protests?