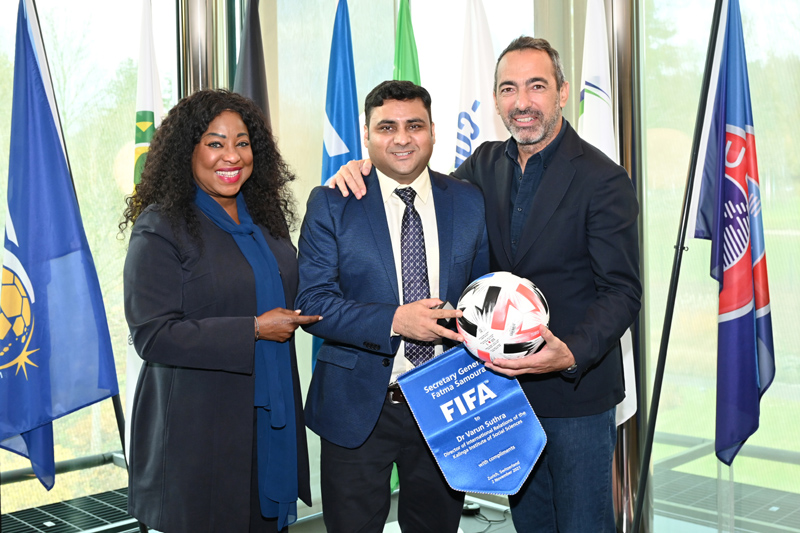 JAMMU, November 7: Dr Varun Suthra, Director of International Relations at KIIT-KISS Renowned universities honored by FIFA Secretary General Fatma Samoura at an event at FIFA headquarters in Zurich, Switzerland.
FIFA management appreciated Dr Suthra for his key role in the successful launch of the FIFA Football for Schools (F4S) program in India in the recent past. F4S would also become a tool for empowering women in India, said FIFA Secretary Fatma.
The congratulations were made in the presence of the CEO of the FIFA Foundation and French football world champion, Youri Djorkaeff.
Youri said that Dr Varun had played an important role as a young professional in connecting F4S to the ground in his country, India, and that it would benefit millions of people.
It is relevant to mention here that the FIFA Foundation developed the F4S program to train students in life skills at a young age using football as a tool in their overall growth.
The program was successfully launched at KIIT-KISS Universities in Bhubaneswar, where Odisha Chief Minister Naveen Patnaik virtually opened the event in the presence of KIIT-KISS founder and Member of Parliament Dr Achyuta Samanta, while FIFA President Gianni Infantino and Swiss MP Dr Nik Gugger also joined the event virtually.