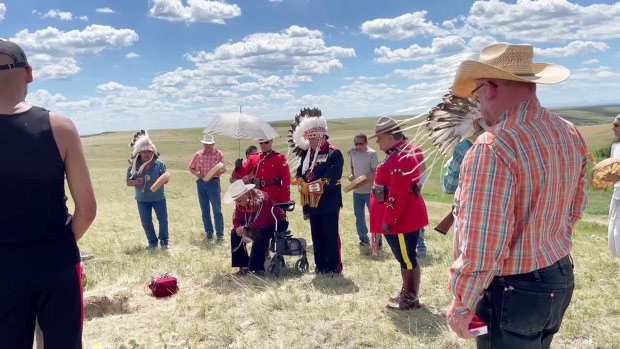 CALGARY – A skull that has been determined to be a prehistoric native was buried on June 26, more than 40 years after it was found in the waters of the Old Man River west of the Monarch Bridge on Highway 3A in the southern Alberta.

This happened in 1979 when someone found a skull and turned it over to the Fort Macleod RCMP detachment.

In October 1979, with the help of the Department of Anthropology at the University of Alberta, it was determined that the skull was from a man over the age of 60 and of prehistoric – and therefore Aboriginal – origin.

Fort Macleod RCMP handed the skull over to the researcher for safekeeping, and that seemed like the end of the story until 2017, when someone handed it over to the local detachment.

In March 2021, members of the detachment consulted with the Blackfoot Elders Council to determine a way to re-bury the skull in an appropriate and respectful manner.

The ceremony consisted of wrapping the box containing the remains of the skull in a traditional blanket, followed by a ceremony of purification and internment.

Songs and prayers were sung for this Blackfoot ancestor as he was buried in a small tomb near the confluence of the Old Man and Belly rivers.

The grave is marked with a white bleached stone which reads “Unknown Blackfoot Warrior”.

Kainai Spiritual Elder Joe Eagle Tail Feathers was consulted with other Spiritual Elders and Sundancers, and a traditional burial ceremony was held on June 26, 2021 on the Blood Nation.

The funeral was presided over by Elder Martin Eagle Child and several other Elders and Blackfoot Sundancers.

Letters to the Editor: July 20: “How many people … would vote for a party that does not recognize climate change as real?” Verification of curators as well as other letters to the editor