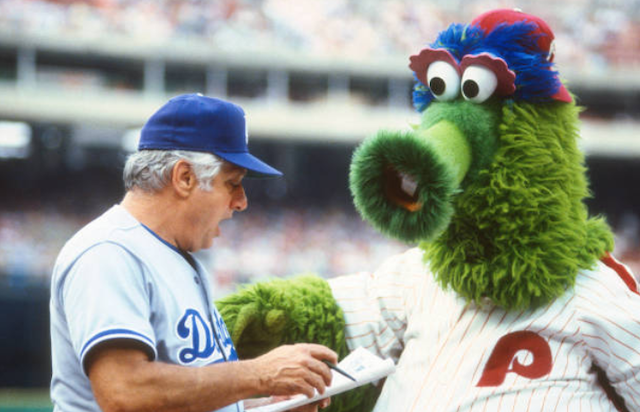 Tommy Lasorda gained a reputation for having a fiery, if not combative, personality throughout his tenure as manager of the Los Angeles Dodgers. While this was often funneled to motivate his team, it led to an altercation with a mascot on this day in Dodgers history.

As the Dodgers faced the Philadelphia Phillies at Veterans Stadium on August 28, 1988, Lasorda became enraged with Phillie Phanatic dressing a model in his jersey. Lasorda barged out of the canoe and started picking up Phillie Phanatic’s all-terrain vehicle.

As the Phillies mascot started walking towards Lasorda, the Dodgers skipper turned and chased after him. A showdown ensued and Lasorda ended up with the doll, which he used to repeatedly punch Phillie Phanatic with.

It wasn’t Lasorda’s only run-in with a mascot during his tenure as manager of the Dodgers. The following August, Lasorda started yelling at the refs for some reason during a game against the Montreal Expos.

In the end, it was because Expos mascot Youppi !, was dancing on the visitors’ canoe and taunting Lasorda and the players for most of both innings. Lasorda was furious with what was going on, and the result was Youppi! being the first mascot ever to be ejected from an MLB game.

Whether it’s coincidence or not, the Dodgers won both games in which Lasorda got mad at a mascot. They defeated the Expos in 22 innings behind Rick Dempsey’s solo homerun and scored three runs in the first inning on Franklin Stubbs’ brace en route to a 5-0 victory over the Phillies.

Lasorda spent 20 seasons managing the Dodgers and has proven to be a worthy successor to Alston. Lasorda went 1,599-1,439-2, won eight NL West titles, four pennants and two World Series. He abruptly announced his retirement in July 1996 in part due to health issues and at the time he became vice-president of the Dodgers.

The Dodgers are celebrating Lasorda’s memory throughout the 2021 regular season with a No.2 patch on their shirt sleeve.

Have you subscribed to Dodger Blue’s YouTube channel? Don’t forget to activate the notification bell to watch player interviews, participate in shows and giveaways, and more!