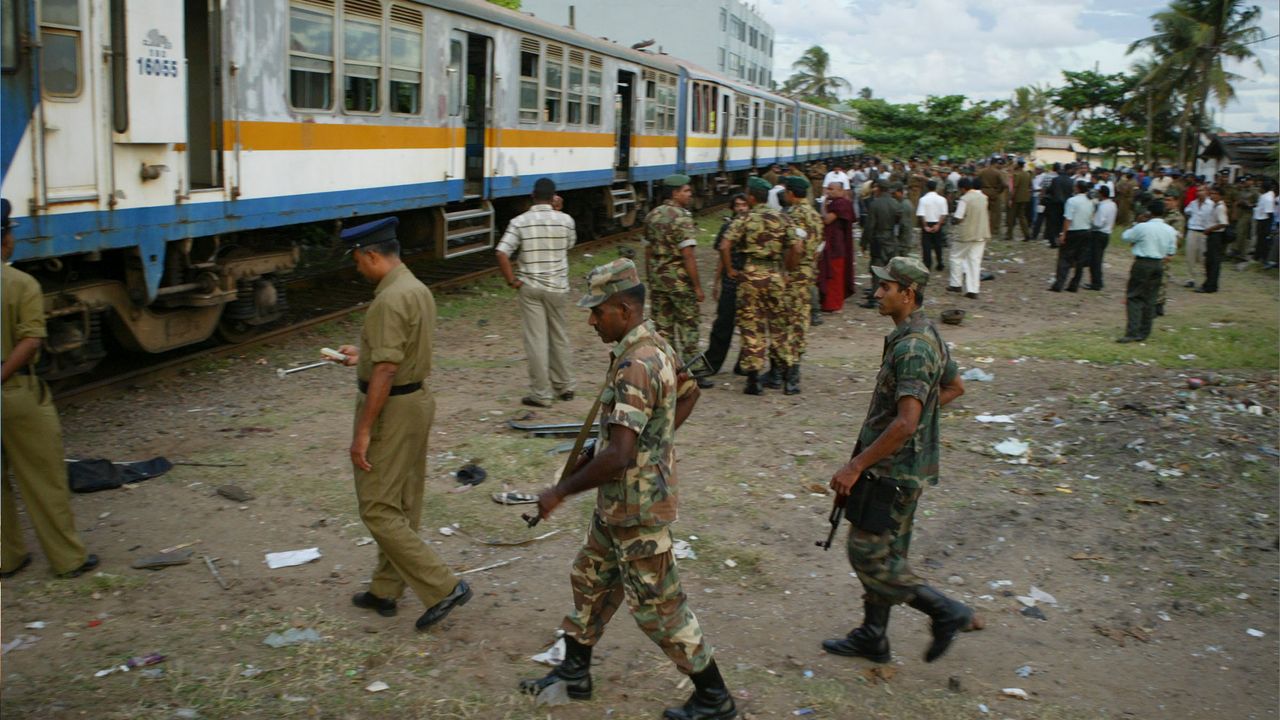 25 years ago: bombing of LTTE train kills dozens of workers in Sri Lanka

On July 24, 1996, a bomb attack by the Liberation Tigers of Tamil Eelam (LTTE) at Dehiwala station outside Colombo killed 64 commuters. 400 other people were injured. LTTE agents placed suitcase bombs containing more than 200 pounds of explosives in four cars during the height of the rush hour. The act deliberately targeted workers going to the suburbs of Sri Lanka’s capital. The train, which was due to leave Colombo Fort station after 5 p.m., was supposed to take city workers home after the day shift. The train was known as the “office train” and was extraordinarily crowded. More than 2,000 people were on board the day of the attack.

The Revolutionary Communist League (RCL), the Sri Lankan section of the International Committee and forerunner of the Socialist Equality Party, issued a statement condemning the brutal attack by the LTTE on the working class, while explaining that the incident was the direct result of the racist war. against the Tamil people, stepped up by the Sri Lankan government.

President Chandrika Kumaratunga’s “People’s Alliance” consisted of her own Sri Lanka Freedom Party, one of Sri Lanka’s two main bourgeois parties, along with the Lanka Sama Samaja Party, which broke with Trotskyism. in 1963-1964, and the Stalinist Communist Party. Sri Lanka Party, as well as several small bourgeois-populist parties. While using populist language, the Peoples Alliance pursued a chauvinistic policy towards the Tamil minority, which fueled support for the LTTE, and carried out vicious attacks on poor workers and farmers.

The link between the war and attacks on working class conditions was illustrated on the same day as the bombing when Kumaratunga addressed a meeting of small tea growers. She declared her government’s determination to remove economic subsidies and threatened to fire workers who are fighting for wage increases. “Lethargic civil servants and teachers who continue their old wars without being aware of the needs of the moment and of changes in society will face heavy penalties, including dismissal,” she said.

The RCL urged workers not to get drawn into the racist anti-Tamil campaign that was unleashed following the bombing by the ruling class. The party called on workers to establish their own independent defense committees to organize the safety of workers and their families. He urged them to oppose the government’s racist war and the government’s growing militarization.

The bombing, a previous bombing of Central Bank employees, and the continued harassment of Sinhala peasants in the Tamil-populated northern and eastern provinces demonstrated the LTTE’s opposition to the unity of the Sinhalese and Tamil masses. The LTTE sought to prevent the development of a movement of workers and the oppressed against the Sri Lankan regime.

On July 19, 1971, the Sudanese Communist Party (SCP) attempted a coup against the government of the Democratic Republic of Sudan and ousted the country’s leader, Jaafar Nimeiry, from power. The blow was short lived, less than a week. On July 23, Nimeiry would be released and returned to power.

Years of immense political crisis in Sudan preceded the coup. Following a coup d’état in 1969 by the Free Officers Movement, Nimeiry led the North African country as chairman of the National Revolutionary Command Council (RCC), the ruling junta where all the political power has been consolidated.

Initially, the SCP had given some support to the RCC government after the 1969 coup. However, fearing the development of a revolutionary movement among Sudanese workers, the RCC began an anti-Communist crackdown in March 1971. Nimeiry had announced the creation of a state-controlled political party called the Socialist Union of Sudan, which would essentially dissolve all parties, including the SCP, into a tightly-run organization. The RCC also forcibly seized control of the unions, where the SCP gained most of their support.

Many SCP leaders went underground, with most of the party’s operations going underground in the spring and early summer of 1971. Under these conditions, the SCP began to prepare for the coup. Status as of July 19. Under the leadership of the Stalinist bureaucracy in Moscow, the SCP turned not to the working class, but to its supporters within the nucleus of Sudanese military officers. The most prominent of this layer was Major Hashem al-Atta who would lead the coup and briefly serve as the commander-in-chief of the armed forces after surrounding the presidential palace with tanks and arresting Nimeiry.

The SCP was the largest communist party in the Arab world, but its coup met with hostility, not only from the RCC in Sudan, but from all surrounding nations. Egyptian Anwar Sadat and Libyan Muammar Gaddafi opposed the SCP coup and supported Nimeiry and his return to power. These bourgeois nationalists, who balanced themselves between the Soviet Union and the imperialist powers, feared that the establishment of a Stalinist-led government in the region would destabilize their own fragile regimes.

Outside of members of the SCP itself, which had been substantially shattered by Nimeiry’s repressions, the coup had little popular support. Atta was unable to bring the army under his control, with the vast majority of generals and other officers continuing to support the RCC.

After a few days, forces loyal to Nimeiry released him from prison and arrested Atta and the other coup plotters, who were court martialed and shot. In the process, Nimeiry intensified his persecution of the SCP, arresting and executing its leaders and banning all unions and other communist-led organizations.

On July 22, 1946, the Zionist organization Irgun bombed the King David Hotel in British-controlled Palestine, killing 91 people and injuring 46 others. The terrorist attack was part of a series, based on the prospect of forcing Britain, or other great powers, to approve the creation of a Jewish state in the region. Among those who died were 41 Arabs, 28 British citizens, 17 Jews and members of several other national groups.

The attack received wide international coverage, not only because of the large number of casualties, but also because the King David Hotel was the seat of the British mandatory authorities who oversaw the occupation of Palestine. It was conceived as a retaliation for a security crackdown carried out by the British authorities against militant Zionist organizations.

Well-organized Irgun agents planted bombs in the hotel’s basement, as well as in a cafe next door and on a nearby street. Some spectators who gathered to see the aftermath of the explosion at the latter location were touched by the detonations that followed. While members of the Irgun claimed that a warning was sent to the hotel nearly half an hour before the attacks, details were disputed and no evacuation was carried out.

The attack had apparently been discussed beforehand within the wider Zionist community. However, its aftermath and the international response resulted in the breakdown of the alliance between the Irgun and several other groups, including the Haganah, the military wing of the Labor Zionists, which took a nominally leftist stance.

Unlike some of the other Zionist organizations, the Irgun only began hostilities against the British after it was clear that the Allied Powers would be victorious over Nazi Germany. His perspective was not based on any form of anti-colonialism, but included scathing denunciations of the “Arabs,” including calls to expel them from the region or to subdue them.

At the time of the bombing, the Irgun was led by Menachem Begin, who would later become Israel’s sixth prime minister, from June 1977 to October 1983.

100 years ago: Major military defeat of the Spanish in occupied Morocco

On July 22, 1921, the Berber rebels (known as the Rifis after the Rif mountain range), led by Abd el-Krim, inflicted a major defeat on the Spanish imperialist troops at Annuel in the northeast of the Morocco, triggering the Rif war. The Spaniards, who controlled areas along the coast including the enclaves of Ceuta and Melilla, sought to push inland and east, ignoring Abd el-Krim’s warnings.

The Spaniards began a retreat, which turned into a rout. Spain sent reinforcements but these were also defeated by the Rifis. In total, Spain lost more than 20,000 soldiers as well as large quantities of arms and ammunition. Abd el-Krim reportedly remarked: “In one night, Spain provided us with all the equipment we needed to wage a great war. Silvestre was reportedly killed, although his remains have never been definitively identified. Abd el-Krim established a Republic of the Rif.

The Rif War has its origins in more than 20 years of aggression in North Africa by the imperialist powers, which was a source of persistent inter-imperialist conflict. During the Algeciras conference of 1906, France and Spain had claimed Morocco and distributed the areas of influence. Despite attempts to modernize its army, the Sultanate of Morocco, which had ruled a unified state since the 17th century, collapsed under European incursions and retained control of only six cities.

Germany also had claims on Morocco, which almost led to a war between the great powers after the Agadir crisis of 1911, when a German gunboat entered a French-held port on Morocco’s Atlantic coast. and raised the possibility of war. The incident sparked mass anti-war protests in Europe led by social democratic parties. The crisis was part of a series of inter-imperialist skirmishes that led to World War I.

In 1912, Spain established, with French and British agreement, an official protectorate in Morocco.

After World War I, Spain and France both renewed their colonial ambitions in Morocco, sparking the rebellion of Abd el-Krim.

The Rif War of 1921, which the French joined, lasted another five years. In a retaliatory war for the defeat of Annual, the Spanish indiscriminately used chemical weapons against civilians. Some Berber organizations claim today that the residues of these weapons still poison the inhabitants of the region. The war ultimately ended with the defeat and capture of Abd el-Krim, who died in exile in Cairo in 1963.