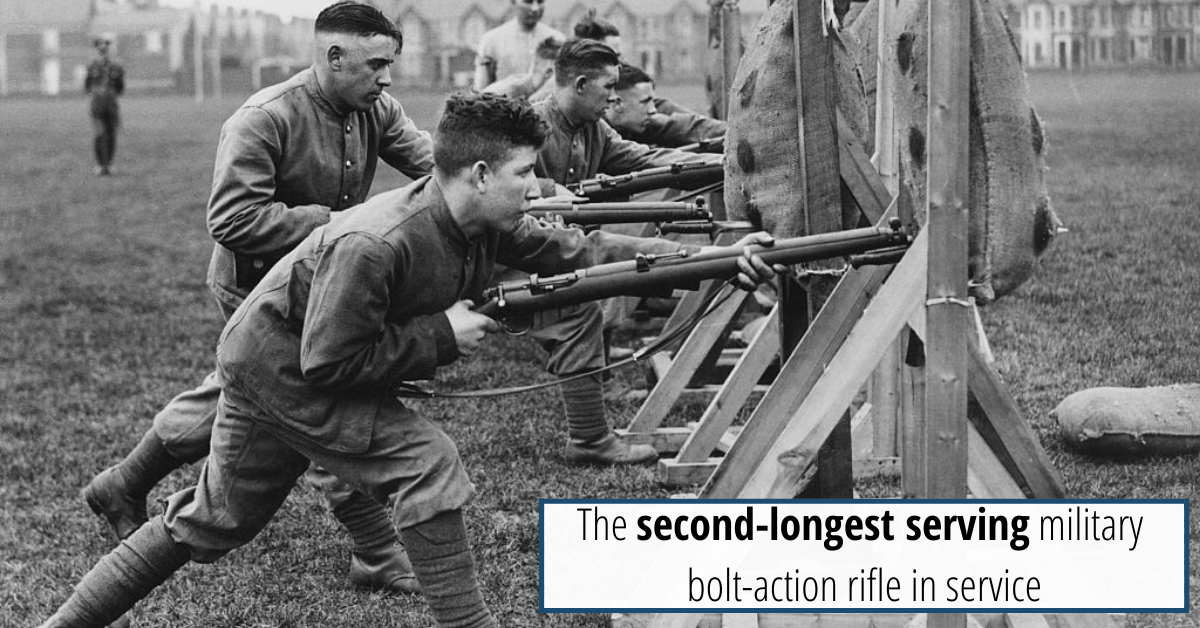 The first version of the Lee-Enfield repeating rifle entered service in 1895. Since then, 17 million units and a number of variants have been produced, and some are still in use today by Commonwealth police forces . The rifle made a name for itself during World War I and World War II and created a legacy that lives on to this day. Here is the history of its use.

Development of the Lee-Enfield repeating rifle and its early uses

At the end of the 19th century, the United Kingdom regularly found itself in conflict. The British Army had a fine field rifle in the bolt-action Lee-Metford, but thought it could do better. This led to the development of the Lee-Enfield, named after lead designer James Paris Lee and the factory in which the weapon was developed, the Royal Small Arms Factory in Enfield, England.

The rifle featured a 10-round magazine, manually loaded with the British rimmed, high-powered .303 cartridge. Its biggest improvement was how quickly it could be fired. This was accomplished through a mechanism in its bolt-action design. Soldiers using the gun were even able to complete a “crazy minute”, during which they could fire between 20 and 30 rounds in 60 seconds. This made the Lee-Enfield the military fasted bolt-action rifle of the era.

Lee-Enfield repeating rifles played a prominent role in World War I and World War II. British troops carried them as their standard in both conflicts, and during World War I appreciated that the guns were shorter and easier to carry than a typical long rifle. Additionally, they could aim accurately from around 600 yards away, while still being able to hit someone over 1,400 yards away. However, there were problems, mainly with excessive recoil and an overheated barrel.

As soon as the First World War ended, the designers of the Lee-Enfield began working on improvements. During World War II, the rifle’s accuracy had improved remarkably and the stock was stronger. A spiked bayonet was also added.

Later use of the Lee-Enfield repeating rifle

Since there was no intention to retire the Lee-Enfield, improvements continued to be made over the years. After World War II, a lighter, shorter and more portable version of the rifle was created. The soldiers who wore it during the Malay emergency – also known as the Anti-British National Liberation War – decided it should be called the “Jungle Rifle”, although the name was never officially adopted.

The rifle was also used in the Korean War. This time it was mainly in the hands of the Australian Army, which modified the weapon into a weapon suitable for snipers. Similar modifications had also been made during the two world wars. Post-conflict Australian troops used the rifle in conflict in Malaysia, and it was used to train sniper candidates until the late 1970s.

Future use and durability

Thanks to a number of factors, the Lee-Enfield had a much longer life than most rifles. In fact, it is the second oldest military bolt-action rifle in service, after the Mosin-Nagant. In addition to service in Canada, the rifle saw extensive use in India and surrounding areas.

Most notably, the Lee-Enfield is still in use by Pakistani and Bangladeshi police forces. While some units have chosen to retire the rifle, others find it still very useful.

The Lee-Enfield and the Canadian Armed Forces

While the Lee-Enfield had an incredibly long run in Europe, it was eventually retired by most forces. The rifle, however, had a lasting legacy with the Canadian Armed Forces.

More about us: Lahti L-39: The anti-tank weapon that the Finns nicknamed the “Elephant Gun”

It was particularly suited to the rugged and cold terrain of the Great White North and for this reason it was worn by the Canadian Rangers for a long time. The rifle’s wooden stock resists cracking or cracking. The rifle also has far fewer moving parts that could freeze in cold weather, and its power means it can not only stop enemies, but also out-of-control polar bears.

Although loved by the Canadian Armed Forces, they officially retired the Lee-Enfield in 2018 and replaced it with the specially developed Colt Canada C19.