The daily cartoon and the live briefing: Saturday July 30, 2022 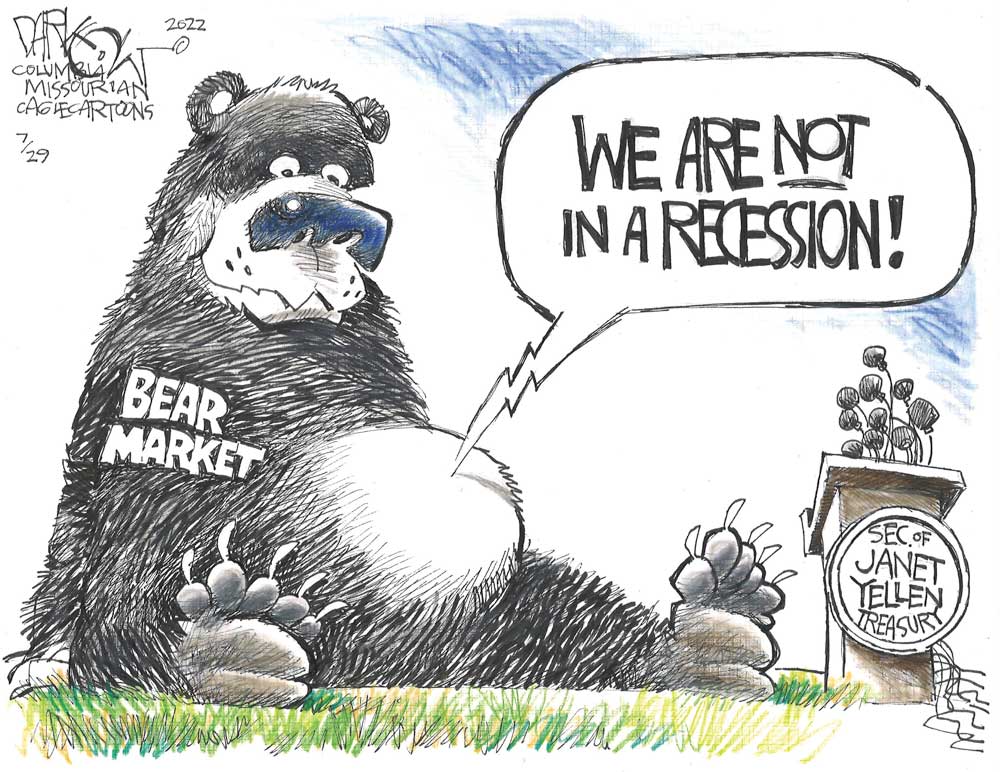 Grace Community Pantry, 245 Education Way, Bunnell, drive-thru open today 10am-1pm. The pantry is organized by Pastor Charles Silano and Grace Community Food Pantry, a disaster relief agency in Flagler County. Feeding Northeast Florida helps local children and families, seniors, and active and retired military personnel who struggle to put food on the table. Working with local grocery stores, manufacturers and farms, we take high-quality food that would normally go to waste and turn it into meals for those in need. The Flagler County School District provides space for much of the pantry storage and operations. Call 386-586-2653 to help, volunteer or donate.

Puppapalooza at James Holland Park in Palm Coast, 18 Florida Park Drive, 6-8 p.m. “Grab your sociable pup and meet us at the dog park for a festival just for your four-legged friends. We will have special treats, toys, dog play areas and tons of fun! Dogs must be kept on a leash outside the dog park. We will have a visit from the Flagler County Sheriff’s Office Canine Team, K9s for Warriors, the Flagler Humane Society and local dog-focused businesses! Also featuring Flagler Beach’s Hang8 (who held the first annual Flagler Beach dog surf contest in May.)

“Constellation”, at the City Repertory Theater, directed by Beau Wade, at 7:30 p.m. July 28-30 and 3 p.m. July 31. Performances will take place in the CRT Black Box Theater at City Marketplace, 160 Cypress Point Parkway, Suite B207, Palm Coast. Tickets are $20 adults and $15 students, available at crtpalmcoast.com, by calling 386-585-9415, or onsite just before showtime. The play is a 2012 comedy-drama by British playwright Nick Payne about the romantic ups and downs of a beekeeper and a theoretical physicist. The pair in “Constellations” take a trip down the rabbit hole of the multiverse, that bizarre theory that posits that there are an infinite number of parallel universes that exist simultaneously, and can be quite similar or drastically different from the one you and I live. Preview: “City Repertory Theater Hopscotches Through Love’s Multiverse with ‘Constellations’.”

Notebook: What to think today of Henry Ford’s birthday (1863)? What about Henry Ford, period: an anti-Semite, a Nazi sympathizer, a pioneer of the police state in the workplace, an ultra-nationalist who ruined the melting pot of Israel Zangwill by building a veritable melting pot giant for ceremonies at Ford Factories, where he would parade his immigrant workers on one side as immigrants and on the other as uniform Americans. The Ford, in short, who wanted more Americans to square dance in response to jazz in the 1920s, because black people made him sick. But he was also Henry Ford, paying his workers better than most (at least $5 a day, he announced in 2014: in inflation-adjusted dollars, that’s $148 in today’s money, still a paltry sum when you think about it – $38,000 apiece isn’t exactly a down payment on Downton Abbey, but imagine what that says about the country’s poverty at the time). He rolled this nation into its car culture (a mixed blessing). He invented the assembly line model that Bill Levitt would adapt to suburban homes (another very mixed blessing) and that the McDonald brothers adapted to food (an absolute disaster, but damn it how weird the Big Mac can sometimes reach this place). He was Big Brother before Orwell and Amazon before Bezos. He was, in short, the American par excellence: a melting pot of paradoxes as inexcusable as they were, or at least as he made them indispensable. He reminds me of that other Henry, that of Kissinger, that mass murderer with the still fiery aura of a Jedi, who was as anti-Arab as Ford was anti-Semitic. Not an inventor, that one. Just a Talleyrand of the last days with the ambition to better remember, as if the genocides in Cambodia and Timur and the massacres in Chile had never taken place, as if ensuring Arab-Israeli enmity as the most simple for America was just a strategy (his favorite word). Another underrated American paradox. I’m not at all sure that a world without either of these men, or paradoxes like theirs, would have been a lesser place. We might not have been the Americans emerging from Ford’s melting pot, but chances are we would have been better Americans if pot presumption hadn’t turned us into chopped chuck no tastier than heads. of meat from McDonald’s Doordashing through Levittown.

The Live Calendar is a collection of local and regional political, civic and cultural events. You can enter your own calendar events directly on the site as you want them to appear (pending approval of course). To include your event in the live calendar, please complete this form.

For the full schedule, go here.

And riots targeting brothels were becoming more common in the 1790s as moral reformers teamed up with local residents seeking to “clean up” specific corners of the city. These rioters were almost always men; the brothels they raided were almost always those run by women. Over the years, Mother Carey had made a living for herself by building a business that played a small part in a vast sexual system. In a culture that idealized the sexual innocence of some women, denigrated the availability of others, and granted widespread impunity to men, prostitution was big business. The narrative of the madam as a pimp dramatizes and personifies the culture’s obsession with separating respectable and ruined women, the fetish and anxiety caused by the idea of ​​virtue in jeopardy and, more broadly, the shame of relationships. illicit sex and double lives. As the face of the ugliest aspects of a patriarchal sexual system rooted in double standards and double lives, the madam had its appeal: her image deepened the chasm between respectable women and ruined women and protected men from all harm. responsibility. But the same system that kept women like Mother Carey in business also denigrated and blamed them – and made them vulnerable.

-Of The Sewing Girl’s Tale: A Story of Crime and Consequence in Revolutionary Americaby John Wood Sweet (2022).
.

The archive of cartoons and live briefings.

10 biggest data breaches in history and how to prevent them