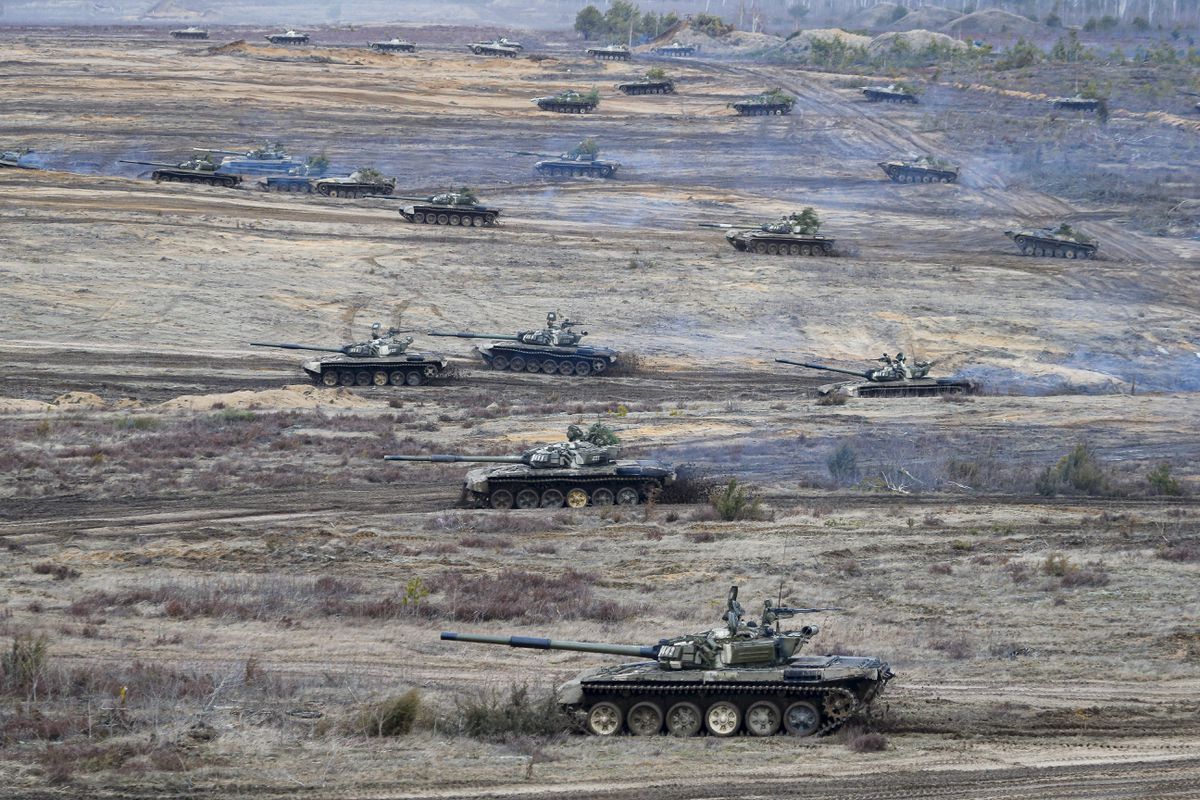 Russian troops in Belarus did not return to their home bases as planned on Sunday, instead continuing military exercises near the Ukrainian border and raising fears that Russia could soon launch a three-pronged attack on Ukraine.

The 10-day drills involving some 30,000 Russian troops, along with Belarusian forces, began Feb. 10, and their expected conclusion was one of the most watched signals of whether Russian President Vladimir Putin would choose to step up or to ease the months- old crisis around Ukraine. No end date was given for the extended exercises.

The continued presence of Russian troops in Belarus leaves open the worst case scenario of Russia attacking Ukraine from three directions, with troops in Belarus capable of pushing towards the capital of Kiev from the north. US officials have estimated that Russia now has between 170,000 and 190,000 troops in position around Ukraine. Most are massed along Ukraine’s eastern border, while large numbers are also concentrated in the south on the Russian-occupied Crimean peninsula.

If Ukraine is invaded, the US and UK will block Russia’s access to dollars and pounds, UK PM warns

Belarusian Defense Minister Viktor Khrenin said Mr Putin and Belarusian President Alexander Lukashenko had decided to continue the joint exercises due to “increasing military activity on the external borders” of Russia and Belarus, as well as “the aggravation of the situation in Donbass”, a region in the south-east of Ukraine.

“There is a conclusion – that it smells strongly of gunpowder in Europe,” Khrenin said.

On Saturday, the Russian and Belarusian leaders jointly oversaw the start of exercises to test the readiness of Russia’s nuclear arsenal, which is the largest in the world.

Russia says it has no intention of attacking Ukraine. But the Kremlin demanded guarantees that its neighbor will never be allowed to join the North Atlantic Treaty Organization – guarantees that the United States and the alliance of 30 NATO countries have said they would not give.

French President Emmanuel Macron called Mr Putin on Sunday in what the Elysee Palace described as “a last-ditch effort to avoid a Russian invasion of Ukraine”. Afterwards, the Kremlin said Mr Putin had told the French leader that the United States and NATO must respond to Russia’s demands “in a concrete and substantial way”. Moscow says NATO’s eastward expansion in the three decades since the end of the Cold War is a threat to its security.

Mr Putin believes Ukraine has been under de facto Western control since a 2014 revolution that toppled a pro-Moscow president. Mr Putin said last week he believed Ukraine’s military was committing “genocide” in the predominantly Russian-speaking region of Donbass, which is part of Ukraine but is under the control of a militia backed by Moscow for eight years. .

Fighting between the Ukrainian army and pro-Russian militants in Donbass has killed more than 14,000 people since 2014. The United Nations monitoring mission for Ukraine says that while both sides have committed human rights abuses Man, there is no evidence to support Mr. Putin’s claim. of genocide.

Since Mr Putin’s remarks, however, there have been a series of explosions and other alleged attacks in separatist-held areas, raising fears the Kremlin is manufacturing a provocation to use as justification for an invasion. pre-planned from Ukraine. US President Joe Biden said on Friday he believed Mr Putin had already made up his mind to attack.

After a visit to the Donbass frontline on Saturday, Ukrainian Deputy Prime Minister Iryna Vereshchuk said the Organization for Security and Cooperation in Europe mission that monitors ceasefire violations had been weakened after Canada, the United States and Britain ordered their nationals to leave early. this month as concerns mounted over a possible Russian invasion.

Ms Vereshchuk said impartial reporting on what was happening in eastern Ukraine was now more important than ever and called on Ottawa, Washington and London to “review” their decision to withdraw from the mission. OSCE.

“We need to have a clear record of these situations. We have to make sure every incident is properly documented,” she told The Globe and Mail after visiting a kindergarten in the frontline town of Stanytsia Luhanska which was hit by a shell last week. injuring three staff members.

Canada and several other Western governments have also temporarily closed their embassies in Kyiv and moved staff to the city of Lviv, near the Ukraine-Poland border. Canada also withdrew the 260-soldier Operation Unifier that had been training the Ukrainian military for seven years, and Ottawa advised all Canadian citizens to leave Ukraine “now”.

Russia and Belarus, which are close military allies, say the tension in Eastern Europe has been caused by NATO, which has deployed additional troops to alliance member countries Poland, Romania and the Baltic States in response to Russian military build-up.

Andrei Sannikov, a Belarusian dissident who in 2010 ran for president against Mr Lukashenko in an election widely seen as rigged, said joint military exercises in Belarus posed a threat not only to Ukraine, but also for the sovereignty of his country.

Their extension almost certainly means that Russian troops will be in Belarus during the February 27 referendum on constitutional changes that would allow Mr Lukashenko, who came to power in 1994, to remain president until 2035.

“Russia now completely controls Belarus. You can see how Belarus is being used as a springboard… which not only threatens Ukraine, but also Europe.

Ukraine says Russian-backed separatists are to blame after a kindergarten in Stanytsia Luhanska was bombed and videos of fleeing civilians made in separatist-controlled areas of Donetsk are fabricated.

The Globe and Mail

Our Morning Update and Evening Update newsletters are compiled by Globe editors, giving you a concise summary of the day’s most important headlines. register today.