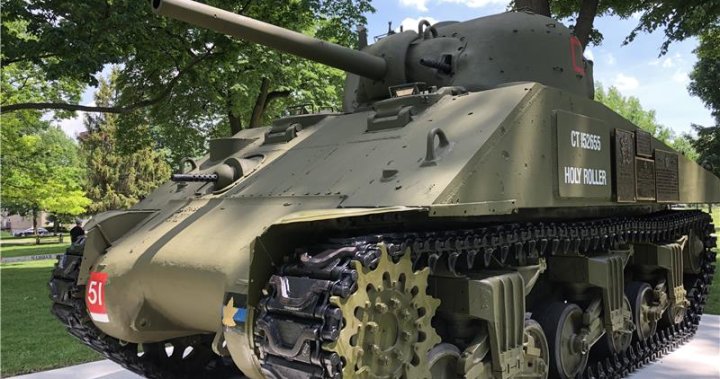 London’s iconic Holy Roller will be the center of celebrations this weekend as members of the 1st Hussars, celebrating their 150th anniversary, rededicate the historic chariot after a much-needed year-long restoration.

The events, which will include a downtown D-Day parade and rededication ceremony involving international dignitaries and a flyover of World War II aircraft, come days after the historic tank returned to its long-term home. date in Victoria Park.

“I’m going to invite all Londoners to come to Victoria Park this weekend. We’re going to have a whole bunch of events, including Saturday, but also the rededication of Holy Roller on Sunday at 11 a.m.,” said Bob Buchanan, who led the fundraiser to restore the float.

Over the past year, volunteers and students from Fanshawe College had worked to restore the tank to its former glory, dismantling, refurbishing and repainting the 80-year-old wartime relic, which stood guard in the center park -city since 1956.

Five years ago, members of the regiment and the city, owner of the tank, opened Holy Roller for the first time in more than 60 years and found that it was rusting from the inside, the hull in danger of cracking. collapse in the tank. decade.

The 33 tonne tank was carefully removed from the park last summer for restoration work, which was carried out at the Fanshawe School of Transport Technology and Learning.

On Monday, those involved in the project were finally able to present their work to the public in a ceremony in which the float came to life for the first time in decades. The next day the tank was placed, using a giant crane, on top of a new platform at its usual location at the north end of Victoria Park.

The restoration work was completed through a fundraising campaign that Buchanan says achieved its goals through community donations and city funds.

“We have ongoing costs, obviously, with maintaining Holy Roller over time. We don’t want to see it deteriorate to the state it was in before undertaking this,” he said.

Holy Roller roars once again at the restoration unveiling in London, Ontario.

Events planned for this weekend, all of which will take place in the park, include a celebration on Saturday from 10 a.m. to 3 p.m., with military bands and re-enactments, and military displays that organizers say “will honor our military history. , featuring vehicles that have been and are still in use.

On Sunday, the city center will host a full D-Day military parade, starting at 10:25 a.m. at the Delta London Armories hotel and ending 45 minutes later at the park, with a short stop outside the hotel of town. between.

The planned route will take the parade north on Waterloo Street to Dufferin, west to Wellington Road, north to Central Avenue and west to the float, according to organizers .

After the parade, the Holy Roller will then be rededicated in a ceremony from 11 a.m. to 12:15 p.m. The ceremony, according to organizers, will see the presence of several international dignitaries and feature remarks, among others, from the retired general of the Canadian Army Walter Natynczyk.

Those in attendance, along with residents of central London, will be treated to a celebratory flyby by the Rumbling Radials, a fleet of World War II-era Harvard aircraft, organizers say.

The events will pay homage to both the tank’s legacy and those who served – and mark the 150th anniversary of the 1st Hussars, the regiment that landed Holy Roller on Juno Beach, driving it through northwest Europe until the end of the war.

According to the regiment, the last surviving member of the tank’s original D-Day crew died in 2021.

“The Holy Roller represents the courage, strength and sacrifice of our service men and women. It is an honor to have this incredible artifact forever commemorated in our downtown core,” said the retired Lt. Col. Ian Haley this week when the float returned to downtown.

“We are eternally grateful for the partnerships that allow us to host such an important part of our collective history and we look forward to coming together to commemorate that history.”

Built in Flint, Michigan in 1942, the Holy Roller has survived more than a dozen battles as it traversed terrain in France, the Netherlands and Germany.

Several battles nearly ended the Holy Roller’s bearing, but repairs managed to keep it running until the end of the war. The 1st Hussars chose to take the tank home as a trophy of war rather than have it scrapped.

Returning to Canada in early 1946, Holy Roller spent two years outside the old armories in London, then eight more in Queen’s Park near Western Fair. It was then donated to the city and moved to Victoria Park in 1956, where it has stood ever since.

— with files from Andrew Graham and Amy Simon