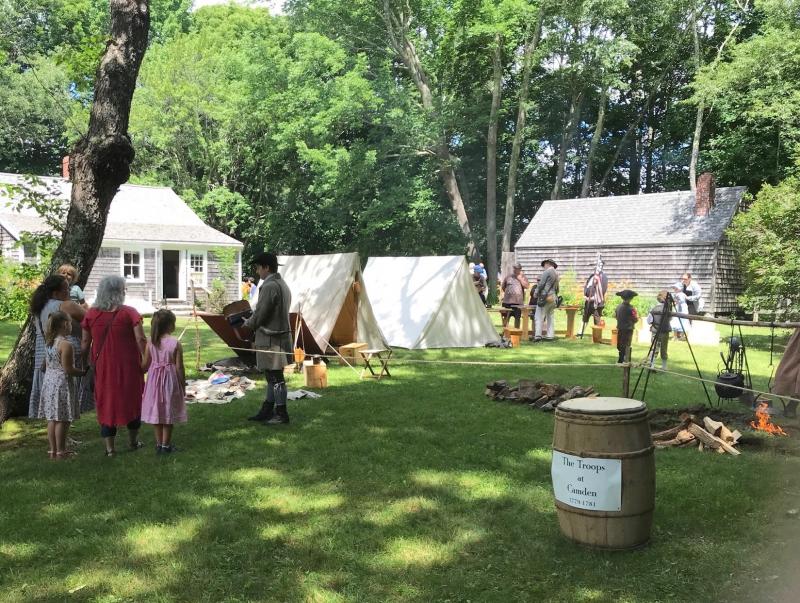 CAMDEN – On Saturday, June 18, from 10 a.m. to 4 p.m., the Camden, Maine troupes, living history interpreters of the period 1779-1814, will camp on the grounds of the 1770s Thorndike Homestead in Camden. This free, family-friendly event is an opportunity for the public to learn about what life was like in Midcoast Maine during the Revolutionary War era and the years that followed.

Archaeological evidence found on the grounds of the Camden-Rockport Historical Society and the nearby Merryspring Nature Center supports the theory that soldiers were garrisoned in the area during the last quarter of the 18th century. Interpreters will explain the military significance of the site and the role Camden played in both the Revolutionary War and the War of 1812.

Visitors can also learn about everyday life in the 18th century through demonstrations and participatory activities. There will be open-hearth cooking demonstrations, with samples for the public, and tours of the historic house. On the outskirts, soldiers cook over the campfire using period recipes, as well as flint and steel ignition demonstrations. Re-enactments of the Camden Militia from the Revolutionary War period, as well as the War of 1812, will display the weapons and equipment of a local soldier. Families will be able to try out a variety of colonial games and toys. An 18th century medical expert will discuss common ailments and treatments of the time.

The event is one of a series of encampments that will take place one Saturday a month, through October, on the grounds of the Camden-Rockport Historical Society’s 1770s Thorndike Homestead (formerly Conway Homestead). The entrance to the farm is located on Route 1, next to Hannaford on the Camden-Rockport town line.