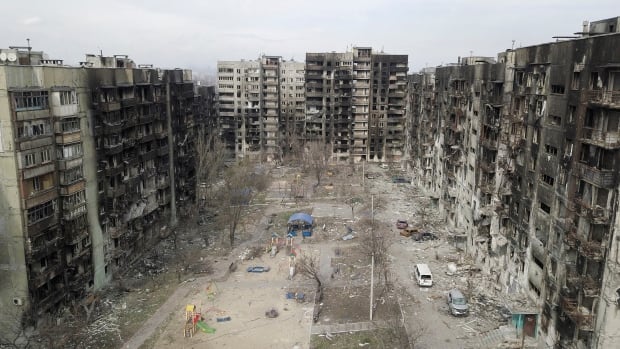 An op-ed from a major Kremlin outlet appears to be justifying the war with its call to erase Ukrainian identity – language that geopolitical experts say is particularly alarming after dozens of dead civilians were found in a kyiv suburb.

Written by Timofei Sergeitsev in RIA Novosti, the rhetoric in the op-ed – titled What Russia Should Do in Ukraine – is inflammatory, even by Russian state media’s usual standards.

He claims that the word “Ukraine” itself is synonymous with Nazism and cannot be allowed to exist.

“Denazification is inevitably also de-Ukrainianization,” writes Sergeitsev, arguing that the idea of ​​Ukrainian culture and identity is wrong.

A prominent scholar whose career has been devoted to the study of historical genocide said he felt sickened reading the article – but he was also convinced the Kremlin was using it to justify atrocities in Ukraine to of the Russian people and the army.

“It’s just a clear and pretty model of what’s going to happen,” said Eugene Finkel, associate professor at the Johns Hopkins University School of Advanced International Studies. “This article has crossed the line from talking about and thinking of the invasion as a sort of collection of war crimes into something much more coordinated.”

When Russian President Vladimir Putin ordered the military invasion of neighboring Ukraine on February 24, he justified the war as a way to “demilitarize” and “denazify” the country – totally baseless propaganda.

Yet Sergeitsev’s editorial takes these words and takes them much further, writing that the Ukrainian elite “must be liquidated because re-education is impossible” and since a “significant part of the masses … are passive Nazis and accomplices”, the Russian punishment of Ukrainian people is justified.

A former Canadian ambassador to Ukraine said the words caused him great concern, noting that the editorial read like an instruction manual for Russian soldiers.

“It’s basically ‘license to kill’ rhetoric,” said Roman Waschuk, who continues to work closely with the Zelensky government in Ukraine.

“He says if someone looks terribly Ukrainian to you, you can ‘leave’ them for the good of the cause.”

Ukrainian MP Yevheniya Kravchuk told CBC’s Power & Politics that her country needs more military help from Canada to stop Russian forces from killing Ukrainian civilians, and that the only way to to do is to “drive the Russians out of our territory”. 8:15

The editorial was published on April 3, the same day the bodies of at least dozens of civilians were discovered in the kyiv suburb of Bucha after Russian forces withdrew.

Many bodies showed signs of torture or had their hands tied when they were killed. Eye-witnesss told the media that the civilians had been executed by Russian soldiers during nearly a month of occupation.

Many world leaders have accused the Russian military of committing war crimes, including the Canadian Minister of Foreign Affairs Melanie Prettyand want Putin to be investigated as a war criminal.

“Nothing is published without permission”

The key question, of course, is whether the op-ed is channeling real Kremlin policy on Ukraine – or whether the author was trying to nudge Russian leaders in that direction.

While Russian state media is notorious for outrageous claims, RIA Novosti is seen as particularly close to the Kremlin and often tries to mirror official thinking, Finkel said.

“Here we are talking about an official state news agency and nothing is published without permission from above.”

Washcuk says he thinks there is plenty of evidence to suggest that Russia’s intention is to eliminate as many top Ukrainian leaders as possible.

“Western intelligence agencies were saying in January that Russia was making casualty lists and arrest lists of people they considered hostile to their cause and too Ukrainian,” he said.

“This [editorial] just say the quiet part out loud.”

Other Russian media observers suggest that while it is certainly possible that the op-ed was published with the consent of Kremlin leaders, that is not necessarily the case.

Justification of an unjust war

Martynov left Russia in the days following the invasion due to a government crackdown on independent media. He now works from Riga, Latvia.

Martynov said he suspected the author of the article was asked by the editor to provide justification for what was happening in Ukraine – and this editorial is what he offered, reflecting the nature generally ad hoc of the invasion since it began almost six weeks ago.

“They [the Kremlin] started the war for no reason and then they came up with a fantastic explanation as to why it was necessary…the longer the war goes on, the more fantastic the explanations they will give,” Martynov told CBC News.

Sergeitsev, the author of the editorial, has written other extreme articles on Ukraine for the same publication and appeared as an expert on Russian state television, but he is not known in Russia.

Martynov said it was impossible to know what impact a single op-ed like this has on the Russian population, given the constant demonization of Ukraine in state media and other sources of information on war are prohibited.

The Levada Institute, arguably Russia’s most reputable polling institute, reported a week into the war, Putin’s approval rating soared to 83%, but Martynov warns against overdoing it.

“It’s a complicated story of opinion polls in a totalitarian regime,” he said. “People pretend [in order] to keep their families and workplaces safe. »

Since Russian bombs and artillery began demolishing cities like Mariupol and Chernihiv, Ukrainian President Volodymyr Zelensky has accused Russian forces of committing “genocide”, something he reiterated on Monday after the discovery of dead and tortured civilians in Bucha. He said Russia was trying to wipe out the “entire nation” of Ukraine.

But Finkel, the genocide scholar, said he’s usually extremely reluctant to use the term because it’s so hard to prove.

“The definition of [genocide] are acts committed with the intent to destroy an ethnic, racial or national group,” he said. “There is a tendency to call what we don’t like genocide. But there is a test that is quite difficult to prove: you have to prove intent, which is almost impossible to do.

However, Finkel says that articles like the one in RIA Novosti, as well as speeches denying Ukrainian identity by Vladimir Poutine and former president Dmitry Medvedev indicate a pattern of behavior and, likely, show intent.

“It may not be clear orders from above, ‘kill these people,’ but the combination of state rhetoric and soldiers’ actions on the ground makes me think that [this is] not just some units losing moral discipline – it’s bigger than that.”

For the Ukrainians, the eventual validation of the Russian agenda may not have much immediate impact on the course of the war or even on the military aid provided by Western countries.

But Waschuk says it will certainly make negotiations with Russia more difficult.

“That means it’s much more difficult to come up with temporary peace proposals,” the former ambassador said.

“The Bucha killings are an emotional barrier and it’s harder for Western countries to push Ukraine to end this war.”

Griffith named Coach of the Year by the Asian Coaches Association