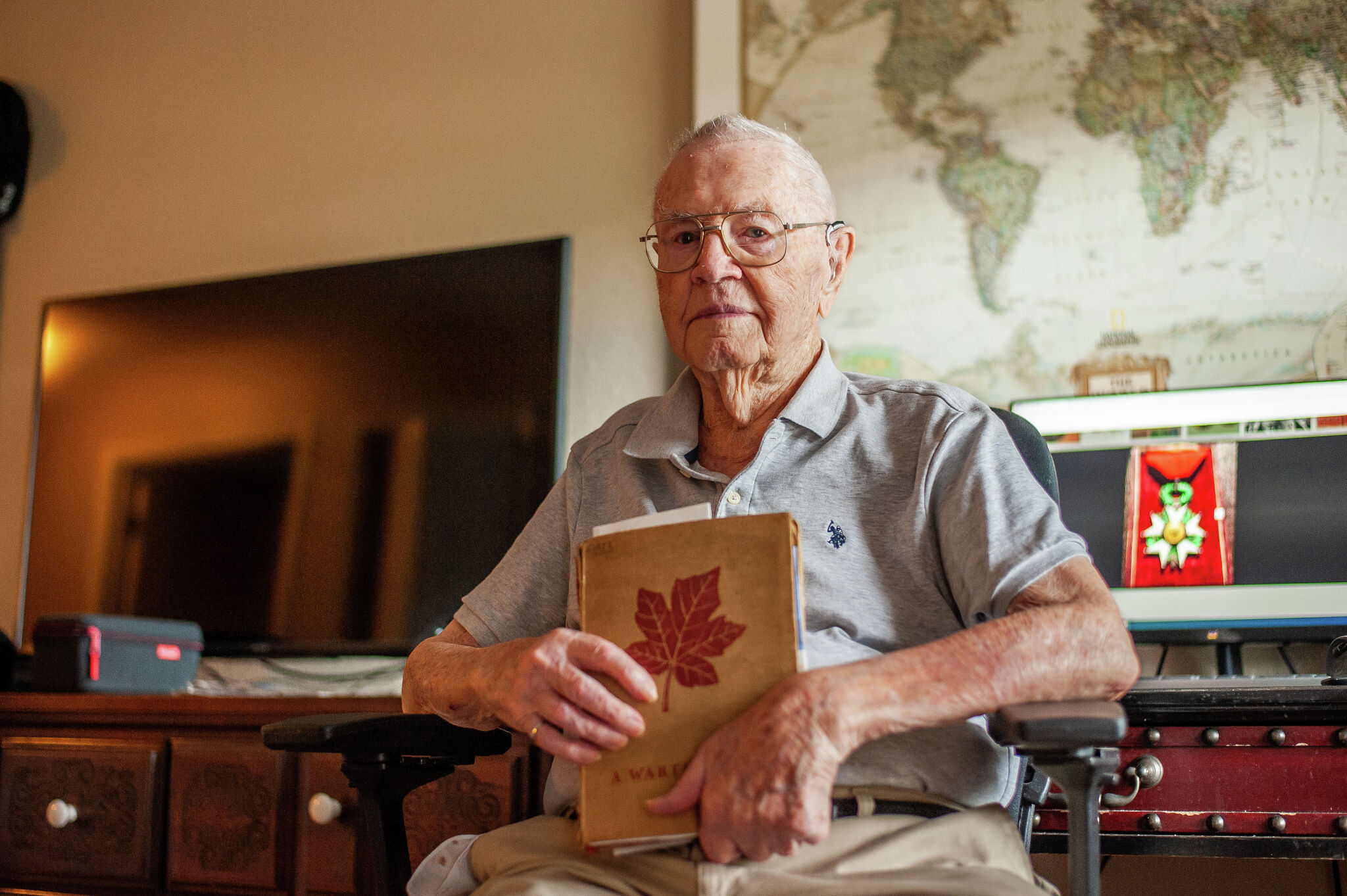 Eighty years after fighting in the Dieppe Raid, Midland resident John “Jack” Date has been honored for his contributions as a Second World War veteran.

Date, 100, from Sarnia, Ont., traveled to Windsor, Ont., earlier this month with his family for two ceremonies. On August 18, Date received the French National Order of the Legion of Honor, France’s highest distinction of civil or military merit.

The Dieppe Raid was an Allied amphibious attack on the German-occupied port of Dieppe in northern France.

Date also received the Platinum Jubilee pin from Queen Elizabeth II. The pins – 70 in total – were originally given to Canadian MPs to celebrate the 70e anniversary of the accession of the queen. In turn, MPs presented the pins to honorees. Date received his pin from Chris Lewis, who represents the Essex constituency.

The following day, August 19, Date was the guest of honor at a ceremony at Dieppe Gardens in Windsor. Date, representing veterans of the Dieppe Raid, laid the first of nine wreaths at the Royal Canadian Air Force Monuments and Anchor Memorial. The ceremony, hosted by the City of Windsor and Veterans Affairs Canada, commemorated the 80e anniversary of the Dieppe Raid – the deadliest day of the Second World War for Canada.

When the Second World War broke out in 1939, Date wanted to help Canada in the fight against Germany, seeing it as an adventure. However, he was 17 at the time, a year too young to enlist properly. In September, Date lied about his age to enlist in the Canadian army. He trained for several years as a sapper or combat engineer. He was responsible for tasks such as building bunkers, repairing roads and bridges, and laying and clearing mines.

Codenamed “Operation Jubilee”, the raid on the French port of Dieppe was designed to give Allied forces a stronger position against Germany, which had occupied large parts of Europe and was pushing into Russia. The raid was also intended to give British, American and Canadian forces experience in launching an amphibious assault.

The raid, however, exacted a heavy toll. Of the 5,000 Canadian soldiers who fought in the Dieppe Raid, 3,363 were killed, wounded or taken prisoner.

In the early hours of the morning, Date, with the Essex Scottish Regiment of Windsor, landed on the beach. Date was carrying 45 pounds of explosives in his arms with the detonators in his front pocket.

His mission was not over, as the Germans had already spotted the landing crews and were targeting the soldiers. Date witnessed explosions and soldiers falling around him until he was knocked unconscious.

When Date arrived, the battle was over and he saw the German troops taking his comrades in arms prisoner. Hoping to avoid capture, he headed for the English Channel and began swimming towards the Allied ships. A German soldier brandished his submachine gun and shouted at Date to turn back. Date swam to shore and thanked the soldier for not shooting him before he was taken prisoner of war.

“They said we were pirates and we didn’t have international protection,” Date said. “They tied our hands. Later we had chains. The channels were really much better.

From the shores of Dieppe, the captured soldiers were forced to march approximately 11 miles to a French hospital. They then traveled for five days on a crowded train until they arrived at the Stalag 8B prison camp, located near the German-Polish border.

Towards the end of the war, the Germans forced Date and the other prisoners out of the camp. Together they were led on a nearly 400 mile march zigzagging across Germany to evade Russian forces coming from the east and Allied forces from the west.

During the walk, they could hear Russian gunfire. Date documented his time as a prisoner in a wartime logbook, provided to him by the Red Cross while he was in prison.

“Most people threw away their (logbook) because we had to walk,” Date said. “I don’t know if there is another one.”

As the prisoners continued their march, Allied planes flew overhead dropping leaflets ordering the Germans to surrender to the prisoners. The long march ended on the banks of a river near Halle, Germany, where they encountered American troops near a collapsed bridge.

“There it was, a nice Sherman tank sitting on the embankment,” Date said.

Building a life at home

After the war, Date returned to Ontario, where he became a member of the Dieppe Veterans Association and the Prisoners of War Association of Canada. He attended the University of Toronto and earned a degree in chemical engineering. On December 27, 1948, he married his wife, Vera.

The couple moved to Portland, Washington, where Date worked as an engineer. In the mid-1950s, he took a job in Midland with Dow Chemical. Their family grew to include three sons and two daughters.

Date took early retirement from Dow and he and his wife moved to Houston, Texas, where he worked as a consultant for Chemical Enterprises. During this time, they rented their house in Midland. When Date fully retired, he and Vera moved back to Midland.

“(Midland) was my hometown,” Date said.

Date turned 100 in February. He lives independently in Midland, with regular visits from his children. He keeps himself busy by playing bridge and online chess, cooking for himself and exercising.

The 23 best photos of British coronations throughout history