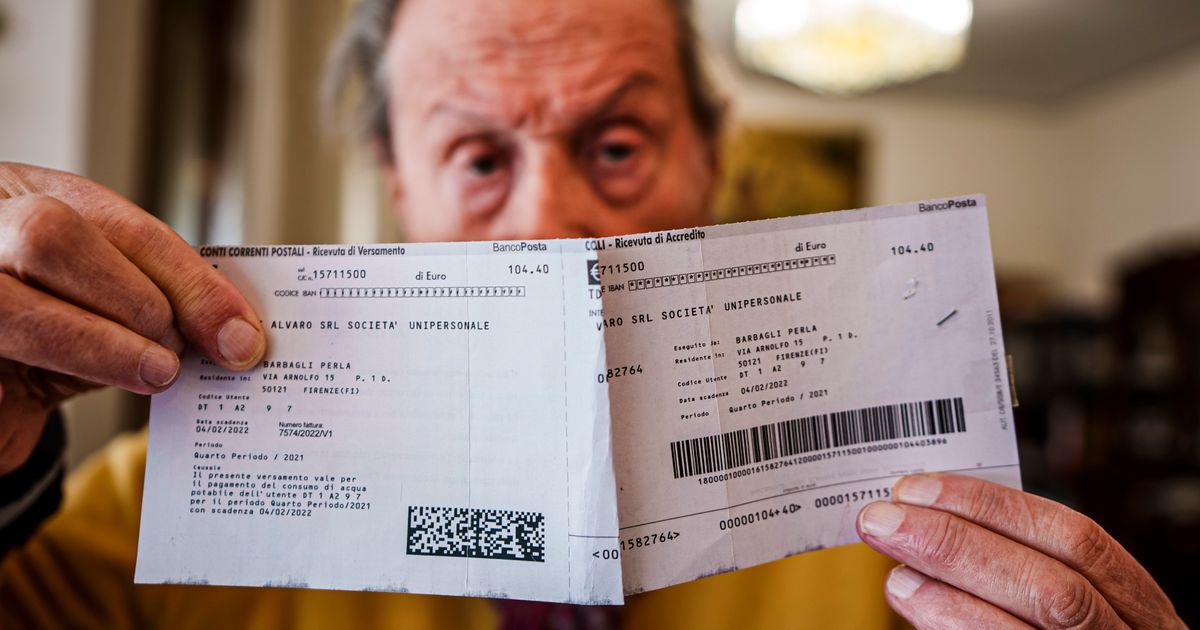 FLORENCE, Italy (AP) — Florence is famous for its contributions to Italian art, architecture and cuisine. But these days, local leaders in the city considered the birthplace of the Renaissance are preoccupied with more mundane matters: paying the bills.

Amid soaring energy costs across Europe, officials at Palazzo Vecchio – the building that serves as both city hall and museum in Florence – have teamed up with a nonprofit local charity to help fixed-income retirees retain their power through an “Adopt-a-Bill” fundraising campaign.

“Florence is a city where you live well, and for this reason too, people live very long,” said Mayor Dario Nardella.

However, a significant number of retirees in Florence live on less than 9,000 euros ($10,205) a year and cannot afford to make ends meet with an expected 55% increase in home electricity costs and a 42% rise in residential gas bills, he mentioned.

The widower Luigi Boni, 96, confirms this. He says that by the end of February he will have emptied his bank account and spent his monthly pension check of less than 600 euros ($680) before covering the charges.

“Either I eat or I pay the rent,” Boni said as he sat on his sofa, a daily newspaper in his hand.

To help him and others of Florence’s approximately 30,000 residents over the age of 65 who live alone, the city administration launched the fundraising campaign with the non-profit Montedomini Foundation, which runs projects aimed at helping the city’s retirees.

The campaign raised 33,000 euros (over $37,000) in its first days. Private citizens, including Florentines living abroad, made more than 200 donations, according to city social councilor Sara Funaro.

“Our goal is to raise funds to ensure that every elderly person who comes to us for help can receive help to cover the increase in bills due to the increase (in energy costs),” Funaro said.

Soaring energy prices are pushing up utility bills – and driving inflation to a record high – from Poland to the UK. In response, governments across Europe are rushing to provide aid to residents and businesses as utility companies pass the costs on to consumers.

In Turkey, where economic pressure is extreme and has fueled protests, Istanbul, Ankara and Izmir are among opposition-run municipalities with similar Pass a Bill initiatives. The Istanbul municipal website says nearly 49 million Turkish liras (around $3.6 million) have been donated since 2020, covering 320,000 utility bills.

Italy currently imports 90% of its gas, much of it from Russia, and Draghi insisted that any European Union sanctions aimed at punishing Russia for recognizing two separatist-held areas in the east of Ukraine must exempt the energy sector.

The association of Italian mayors has said the government’s response has so far been insufficient to help cities cope with hundreds of millions of euros in additional energy costs, forcing them to choose between balancing budgets or cutting costs. services.

Florence, Rome and other cities kept their civic monuments and local government buildings dark on February 10 to draw attention to the situation.

Florence’s Adopt-a-Bill campaign has popular support. As well as being a top tourist destination, the capital of the Italian region of Tuscany has a long history of success in providing social services to poor and vulnerable residents.

“It’s a great initiative because you can help people who can’t come to pay a bill that has shamelessly reached unsustainable costs,” said Luca Menoni, owner of a butcher shop in the food market. covered with Sant’Ambrogio in Florence.

“I’m paying a (electricity) bill myself that’s double what I used to pay,” Menoni said.

Boni may be getting help with her energy bills to get her through the winter and avoid a planned move to a retirement home. But he’s still on a tight budget that doesn’t allow for a lot of luxury.

“Steaks? Me at? Let’s not even talk about it. I eat (cheap) packaged food,” he said. After the death of his wife, he said: “I became an expert in economical cooking.

Nicole Winfield in Rome and Zeynep Bilginsoy in Istanbul contributed to this report.

ASOFARMA CENTRAL AMERICA AND THE CARIBBEAN, THROUGH ITS ADIUM HEADQUARTERS, SIGNS AN IMPORTANT AGREEMENT WITH MODERNA INC. TO COLLABORATE IN THE DISTRIBUTION AND MARKETING OF VACCINES AGAINST COVID 19 IN THE REGION