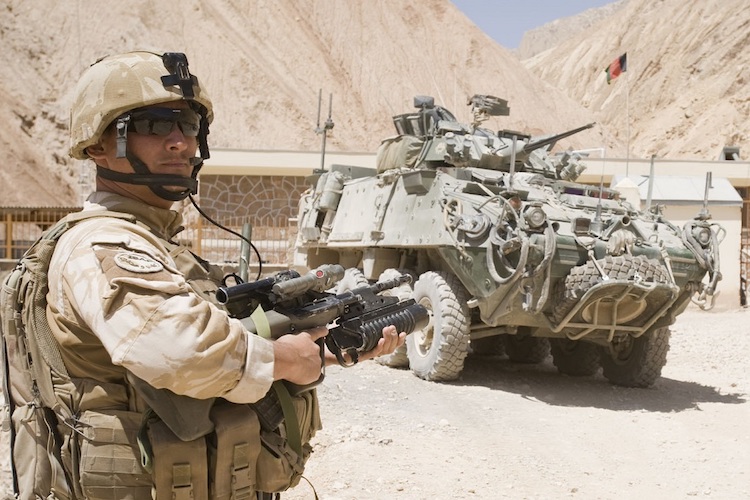 The departure of the United States from Afghanistan marks the culmination of the long turbulent period that began with the Soviet invasion of 1979. During this time, the Afghan Islamists became the adversaries of the United States and the USSR. Russia, and the discord between them helped them survive and persevere. While some Russian observers might view the US withdrawal as a defeat and a weakness, this development could lead to more problems for Moscow than benefits.

The US-led war in Afghanistan began in October 2001 in response to the September 11 attacks organized by Al Qaeda. Photo: internationalaffairs.org.au.

US-Russian competition and the emergence of the Islamic threat

The consequences of the US withdrawal from Afghanistan must be understood in the context of the history of Moscow-Kabul relations. Afghanistan has been a volatile place for a long time. In 1973, following a Rebellion organized by pro-communist rebels, the monarchy, led by Mohamed zahir shah, the only legitimate force accepted by most Afghans of diverse ethnicities, was overthrown, sparking a civil war. As internal fighting ravaged the country, Moscow first observed from a distance, but then decided, in 1979, to intervene in what became the USSR’s first foreign invasion outside its sphere of influence. . The ensuing guerrilla warfare lasted for years, with Afghanistan turning into a “bloody wound” for the Soviet Union, in the words of the Soviet Union. Mikhail Gorbachev.

It is generally assumed that the Soviet invasion was doomed, as the British had been before and the Americans after. This was not the case. Unlike the United States and even the British Empire, the USSR was prepared for a conflict that spanned several generations. It should be remembered that it took almost a hundred years for the Russian Empire to conquer the Caucasus, while the Soviet war with Basmachi, the Islamic rebels of Central Asia, lasted more than a decade, until early 1930s. But Gorbachev’s unexpected rise to power weakened the Soviet state, and by 1989 Soviet troops had left Afghanistan.

In the context of the Cold War rivalry, the United States was understandably content with the Soviet situation and actively supported the Afghan resistance, portraying its members as heroic freedom fighters. But with the departure of Soviet troops and the Afghan government left to its own devices, the Taliban, an Islamist movement and a military organization, have taken control of the country. In 1995, the Talibs enter Kabul, assassinate the Afghan president Mohamed najibullah, and created the Islamic Emirate of Afghanistan.

Since Najibullah was installed by the Soviets, Washington was not disturbed by his demise, and the Taliban did not subsequently emerge as a problem for the American political establishment, for various reasons. This perspective, however, was primarily defined by the United States’ relationship with post-Soviet Russia. Undoubtedly, some American policymakers and observers believed that Russia would transform into a democratic capitalist state, marking this Francis Fukuyama called “the end of the story”. But, paraphrasing George orwell, â€œAll ‘endings of the story’ are equal, but some are more equal than others. In this sense, Russia’s “end of history” in the form of the Soviet collapse differs greatly from that of the United States. resistance, even if some of its members were Islamists, in the Chechen wars for independence, on the assumption that they were the enemies of Russia. At the same time, the Russian elite have continually tried to extend an olive branch to Washington, even as the geopolitical honeymoon seemed over, especially after the 1999 attack between the United States and the United States. NATO against the former Yugoslavia.

The “Scythian” grievances of the West and Russia

Vladimir PoutineRussia’s succession to the presidency in 2000 did not bring about an immediate change in Russian attitudes: the new elite was not yet ready for a direct confrontation with adversaries and underestimated the danger of Islamism global. When he came to power, Putin sent mixed signals to the United States. On the one hand, he hinted that Russia would be more assertive, visiting North Korea and canceling a Chernomyrdin-Gore Commission deal that had cut off Russian arms sales to Iran. On the other hand, he was the first foreign leader to express full support for Washington after 9/11. He also made no objection to US bases in Central Asia, likely expecting geopolitical rewards. When none followed, Putin’s position hardened.

In his Munich speech in 2007, the Russian president accused the United States of striving for unchecked world domination, referring to its wars in Afghanistan and Iraq. By then, Russian-American cooperation had waned and Moscow was pushing Kyrgyzstan to close American bases in Manas. Still, Putin did not want to completely sever ties. In 2012, for example, he agreed that the United States could use the air base near the Russian city of Ulyanovsk as a “multimodal” transit facility to “transport goods and personnel to and from Afghanistan” .

Perhaps one of the best glimpses of Russia’s position on Afghanistan comes from a 2010 editorial for the New York Times co-written by the general Boris Gromov, former Soviet commander in Afghanistan, and Dmitry Rogozin, then Russian Ambassador to NATO. The article suggested that the United States and Russia should work together, as the two countries have a lot in common, at least when it comes to jihadists. The authors noted that Soviet troops in Afghanistan had defended “Western civilization,” which was, in a way, a reference to an idea first expressed in 1918 by the Russian seminal poet. Alexandre blok in his poem “The Scythians”.

In a way, these ideas were reflected in the thinking of a considerable section of the Russian elite, not just General Gromov and Rogozin, who hinted in the editorial that America should reconsider its views on Russia, and if the former were to follow his advice. , Moscow would help him deal with Afghanistan. The Kremlin was clearly prepared to compromise with the United States in the name of visible geopolitical cohesion, but nothing was achieved. In addition, with the annexation of Crimea in 2014 and the Donbass War, US-Russian relations deteriorated almost to the level of the Cold War era, and any hope of cooperation between the two countries faded. practically extinct – even direct conflict could not be ruled out. Marking a new low, last year it was reported that members of a Russian military intelligence unit (GRU) offered to pay bounties to Taliban fighters to kill US and Allied soldiers in Afghanistan.

“Defeat” of the United States and Russian fears

Yet after the president Joe biden announced in April 2021 that US troops would withdraw from Afghanistan to end a war that had lasted around two decades – a move that sparked heated discussions over America’s crushing ‘defeat’, the Kremlin changed of your. Moscow probably realizes that it was the â€œwhite brothersâ€ who protected Russia from the Asian hordes and Islamic extremists, and not the other way around. With the US withdrawal and the emergence of a power vacuum, these hordes could potentially spill over into Central Asia and head further north, to the borders of Russia, reactivating radical Islamism in the Caucasus regions of the North and the Volga.

This is an old Russian fear, envisioned in the 1990s by the late general Alexandre lebed, which at one point was considered Boris Yeltsinthe successor of. While the Taliban assures everyone, including Russia, that it has no appetite for overseas expansion – and the Taliban elite might in fact say it – the movement cannot control all of them. its factions: some of them surely dream of a world Islamist revolution. To add to the concerns of the Russians, there are groups of radicalized Tajiks and Uzbeks currently operating in Afghanistan who may attempt to bring extremist ideas back to their home countries, near Russian borders. Finally, the very vision of the Taliban beating the powerful “infidel” – America – could incite Islamists everywhere, including in the backyards of Russia. If history is any indication, the Bolshevik victory in the Russian Civil War spurred revolutionary movement around the world. All these factors alarmed not only the Russian leadership, but also the countries of Central Asia. In May, the Tajik president Emomali rakhmon arrived in Moscow for consultation and assurance, becoming the only foreign leader to participate in the annual Russian Victory Day parade in 2021.

The decline of the Roman Empire opened the doors for hordes of barbarians to invade unprotected territories and destroy Rome’s traditional enemies in the process. After (and even before) the January 6 Capitol uprising in Washington, some observers have drawn parallels between the United States and the declining Roman Empire. There is an analogy to be drawn: a decline in resources and social cohesion has led to the withdrawal of Rome (and now Washington) from the periphery of the empire. In both cases, many tribes and nations initially applauded this release. But let’s not forget that the end of Roman rule did not lead to universal peace, but to the long dark ages, strewn with chaos and subsequent decline.

Surely the Kremlin realizes that this scenario is likely to happen. And if chaos ensues after the United States withdraws from Afghanistan, the American imprint in that country and the Middle East may well be remembered with nostalgia, as Roman rule once was in a darkened plunged Europe. in the dark ages.