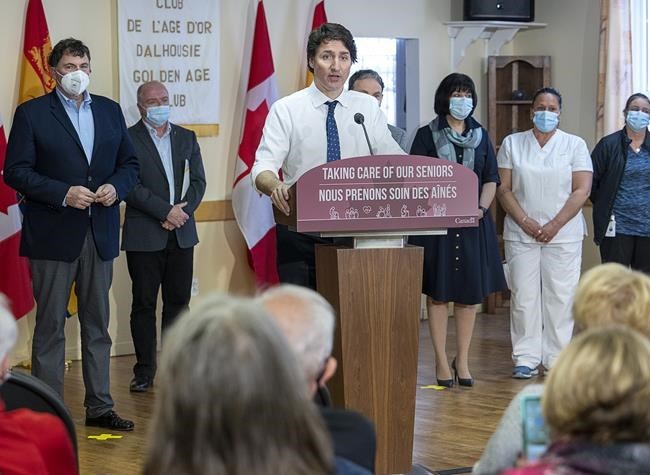 Trudeau mentioned the plan to provide artillery to repel Russian invaders at a press conference in Dalhousie, New Brunswick, saying the decision followed a specific request to Canada from the government of Ukrainian President Volodymyr Zelenskyy. .

“Their most recent request (for assistance) from Canada is to help them with heavy artillery because it’s in this phase of the war right now,” Trudeau said. “And Canada will send heavy artillery to Ukraine with more details to come in the coming weeks.”

Earlier this month, Zelenskyy released a list of equipment he said the Ukrainian army needed to fight Russia, including 155 millimeter heavy artillery guns and ammunition.

The Liberal government has already tapped into the inventory of the Canadian Armed Forces to provide lethal aid to the Ukrainian military as it fights off a Russian invasion that began in late February and has so far killed thousands.

But Defense Minister Anita Anand hinted that the army’s spare parts inventory was depleted and that the government – which had earmarked $500 million in military aid for Ukraine in his last budget – planned to buy equipment from suppliers.

The Canadian Army‘s main artillery gun is the M777 howitzer, firing 155 millimeter shells, more than 30 of which were acquired from the United States as of 2005.

However, unlike some of the weapons already given to Ukraine, the M777s remain in heavy use. In response to the Russian attack, the government recently deployed an M777 unit to reinforce a Canadian-led NATO battlegroup in Latvia.

Retired Lt. Gen. Andrew Leslie, who served as an artillery officer, said Canada could send M777s to Ukraine. However, he suggested that the weapons would be vulnerable to Russian assault.

“The M777 gun crews are in the open and they are being towed by light-skinned vehicles,” he said. “So they are very vulnerable to fighter jets to attack helicopters and relatively sophisticated forces like the Russians.”

Canada previously operated the tank-like M109 self-propelled howitzer before it was withdrawn in 2005 due to escalating costs. Leslie wasn’t sure if some of them might still be in storage, but suggested they might be useful.

If Canada were to send M777s, he added, they would have to be replaced for the military. Leslie nevertheless said that Ukraine clearly needs heavy weapons such as artillery, “and right now Ukraine has a higher need than us.”

Dutch Prime Minister Mark Rutte said in a tweet on Tuesday that his country would provide armored vehicles, following a call with Zelenskyy. “With our allies, we are considering providing additional heavy equipment,” Rutte wrote.

Trudeau spoke with NATO and European leaders on Tuesday in a virtual meeting hosted by US President Joe Biden.

The group discussed its continued support for Ukraine and economic sanctions against Russia, and pledged to continue working with and through the EU, G7 and NATO, according to the White House.

Canada has imposed sanctions on 14 other Russians with close ties to President Vladimir Putin, including his two adult daughters, Maria Vorontsova, 36, and her 35-year-old sister, Katerina Tikhonova.

The federal government says it faces sanctions as close associates of Putin who are complicit in Russia’s unjustifiable invasion of Ukraine.

“This Russian regime and its associates must continue to be held accountable for their actions,” Trudeau said.

Trudeau praised Ukrainians who “fought like heroes” against the Russian invaders.

“They are fighting for the values ​​that underpin so many of our free and democratic societies,” he said. “This is why the world must continue to mobilize, why Canada continues to stand with Ukraine, to stand against Russia, but also to ensure that this conflict does not escalate elsewhere.”

Global Affairs Canada said in a press release that a report presented by experts from the Organization for Security and Cooperation in Europe last week “confirmed that Russian forces are committing serious atrocities and human rights violations. man in Ukraine, including war crimes and possibly crimes against humanity”. .”

The United States and the European Union have targeted Putin’s daughters and other family members, saying they believe the Russian leader has hidden assets with them.

Putin is extremely private about his personal life, avoiding mentioning his children in public.

“I never talk about my family with anyone,” Putin told reporters at a press conference in 2015, according to the BBC.

Putin married Lyudmila Shkrebneva in the 1980s when he was a KGB agent and she was an Aeroflot flight attendant. They divorced three decades later.

Eldest daughter Maria is a medical researcher and is said to be a businesswoman and developer.

His youngest daughter, Katerina, was a competitive dancer turned tech developer, appearing publicly at performances and at occasional tech talks.

So far, no sanctions have been imposed on the woman named in the media as Putin’s longtime love partner. Photos of public appearances document years from radiant Putin to Alina Kabaeva, a former Olympic gymnast.

Kabaeva became a Duma lawmaker and later a board member of a Russian national media company, whose media promoted the Russian invasion of Ukraine. As noted by British tabloids, Kabaeva’s photo and name recently disappeared from the National Media Group website as sanctions against Putin’s intimates approached.

Following the Russian attack that began on February 24, Canada imposed sanctions on more than 700 individuals and entities from Russia, Ukraine and Belarus.

Sanctions last week targeted organizations that provided support to the Russian military – directly or indirectly – including the Moscow Institute of Physics and Technology, Integral SPB and Shipyard Vympel JSC.

The EU also introduced a series of sanctions, targeting Russia’s lucrative energy industry with an embargo on coal imports, as well as a transaction ban on four key Russian banks accounting for 23% market share in the Russian banking sector.

The 27-nation bloc has also banned Russian-flagged vessels from EU ports, except for agricultural and food products, humanitarian aid and energy.

Since Russia’s annexation of Crimea in 2014, Canada has imposed sanctions on more than 1,100 individuals and entities.

This report from The Canadian Press was first published on April 19, 2022.

— With files from Jordan Press and The Associated Press

What is an emergency loan?