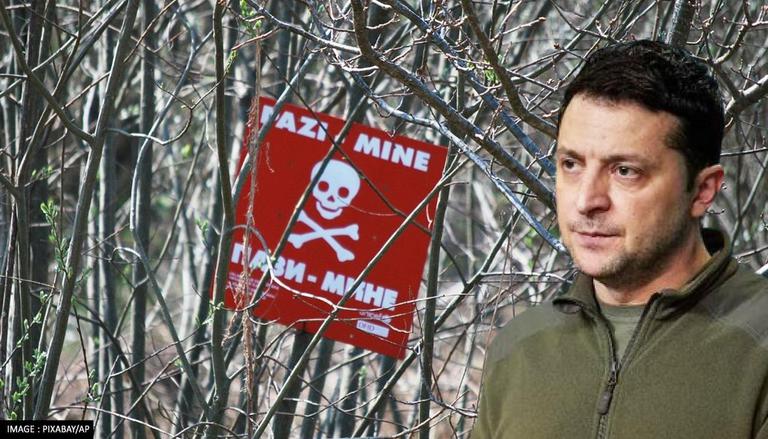 As Russian aggression against Ukrainian civilians continues even after the war entered its 75th day on Monday, explosives left behind by Russian forces will be unearthed with Canadian help, Zelenskyy said.
The latest announcement was made during a joint press conference held by Ukrainian President Volodymyr Zelenskyy and Canadian Prime Minister Justin Trudeau. According to Zelenskyy, Canada has agreed to help Kyiv detect and deactivate mines in Russian-occupied territories.

“The Russian occupiers left behind thousands of mines, thousands of banners and shells. They threaten our people, our children. And today we agreed to establish maximum cooperation in this direction so that there is no longer such an ‘exclusion zone’ left in Ukraine, where one cannot enter due to the threat of Russian mines,” the Ukrinform news agency reported. During the press conference, the President of Ukraine also awarded the “Excellence in Service” medal to the famous Ukrainian dog, Jack Russell. Notably, the Brave Dog has been a well-known canine for its intelligence in identifying bombs. Since the start of the war on February 24 this year, the dog has located and prevented the detonation of at least 200 explosives.

“Today I want to reward those Ukrainian heroes who are already demining our country. And with our heroes, a wonderful little sapper – Patron – who not only helps to neutralize explosives but also teaches our children the necessary safety rules in areas where there is a threat of mines,” Zelenskyy said in a statement after the ceremony.

It is worth the fact that the Canadian Prime Minister paid a surprise visit to the war-torn country of Ukraine on Sunday May 8. He also visited Irpin and denounced the reckless brutality of Vladimir Putin’s illegal war. During the joint conference, the two leaders condemned President Putin’s unprovoked, unjustifiable and illegal war, and denounced Russia’s horrific attacks on Ukraine’s infrastructure and its civilians. Separately, Trudeau announced additional military aid of $50 million. It has pledged to provide at least 18 drone cameras, including in-service support and repair, $15 million worth of high-resolution satellite imagery, up to $1 million related small arms and ammunition , and additional ammunition for M777 howitzers to the Ukrainian army.

May 9 in New York Rangers history: A playoff win