After the Pope’s apology: what comes next? Melissa Mbarki for Inside Policy 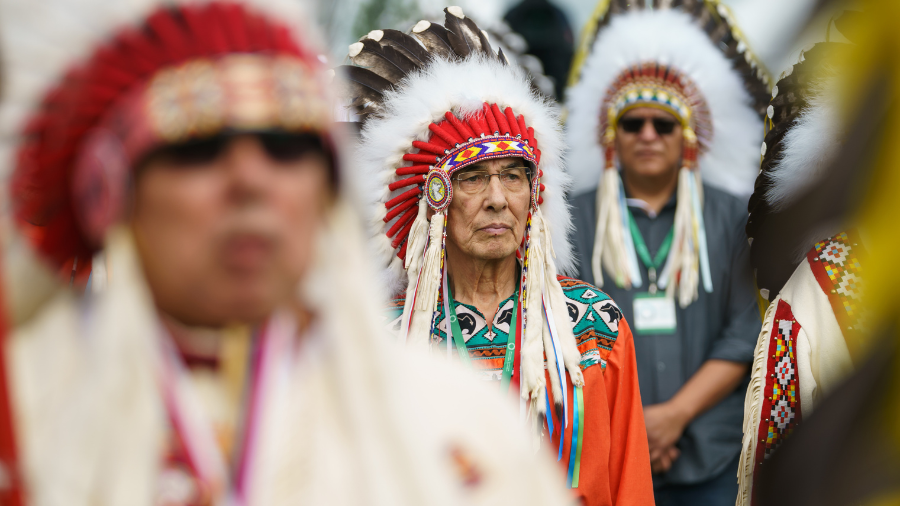 There was a moment before the Pope’s speech that made me think. I didn’t know what to expect, but seeing the Pope walking alongside Indigenous leaders was a first for me. This had never happened before, and for a brief second I felt hope.

We witnessed old traditions meeting a new era. A new era of hope, resilience and healing.

To heal, the trauma caused by these residential schools must be acknowledged. I was a child when the Muskowekwan residential school was operating in my community. Many of my classmates were abused at this school.

We learned about death at a young age. Residential school students did not return to class because they committed suicide or were involved in tragic accidents. These were not easy conversations to have with us for my mother or our teachers.

I wondered if an apology was enough. Would these apologies resonate with families who lost their children or survivors today? I had very mixed feelings about the whole thing.

The pope acknowledged that the apology was traumatic for many: “Remembering the devastating experiences that took place in residential schools hurts, angers, causes pain, and yet it is necessary. Many survivors among the crowd are now elders from our communities and the sadness in their eyes tells this story of pain and anger.

This is where the apologies started to resonate with me:

Again, I think back to the stories you told: how assimilation policies ended up systematically marginalizing Indigenous peoples; how also, through the residential school system, your languages ​​and cultures were denigrated and suppressed; how children suffered physical, verbal, psychological and spiritual abuse; how they were taken from their homes at a young age and how this indelibly affected the relationships between parents and children, grandparents and grandchildren.

These schools were designed for assimilation. If education were the priority, aboriginal peoples would have the highest number of graduates in the country. Unfortunately, this is not the case and many only received a sixth grade education when they left.

The children leaving these schools lacked an education, basic life skills, and cultural knowledge that would have been passed down from their parents and grandparents. What they brought home was post-traumatic stress disorder.

One thing that is rarely talked about is the psychological harm that children from residential schools returned home with. Indigenous communities were not provided with the resources to help their children and we still are not today. Why was it acceptable to uproot children from their families and send them back without a support system in place?

Would the Canadian Army send a veteran home without any mental and physical support in place? No. Yet that is what has happened to Indigenous peoples across the country.

The pope has acknowledged the wrongs and for me this is the first step towards healing and reconciliation. What needs to happen after the apology is to expedite policing, addictions, and mental health services to reservations. Many of these initiatives are red tape and will take years, if not decades, to materialize.

Partnerships are important. The Canadian government, the Catholic Church and Indigenous leaders need to come together and start working on tangible support systems that are lacking in our communities. It’s not an option today, it’s a necessity.

Addictions and crime overwhelm our communities. We are still dealing with the trauma left by residential schools today and we will continue to do so if we do not get help. I will continue to advocate for these resources until every community has access to them.

Melissa Mbarki is a Policy Analyst and Outreach Coordinator for the Aboriginal Affairs Program at the Macdonald-Laurier Institute and a member of Treaty 4 Nation in Saskatchewan.