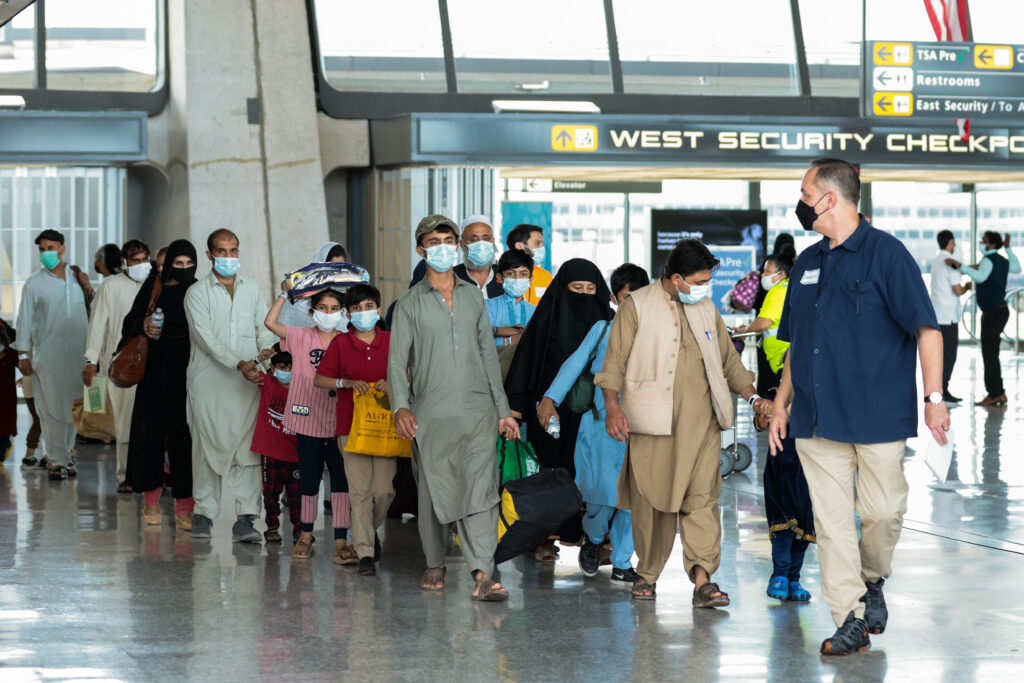 Heval Mohamed Kelli, 11, believed his family were going on vacation after crossing the Syrian border into Turkey in 1996, when his father paid smugglers to take them to safety in Germany.

He was unaware at the time of the political persecutions his father, a lawyer, was facing in Syria or how life was going to change drastically as they mostly lived in resettlement camps for the next few years in a unknown country.

Kelli eventually settled in Clarkston in 2001, where he and his family still lived in poverty, but the opportunities for better education and professional mobility sparked optimism they did not have in the camps. German refugees. Two decades later, Kelli watches with keen interest as hundreds of thousands of Afghans flee their country after the Taliban declared control when the United States ended its role in the longstanding conflict.

Kelli was 17 when he arrived in America and did not speak English. He now works at Northside Hospital as a cardiologist. It’s a piece of the American dream that started small as a teenage refugee working as a diver to support his family. Now he is inspired to help refugees and others living in underserved communities in the United States.

“These Afghan refugees come from a very unfortunate situation, it is so sad to see what is happening,” he said. â€œThey are just happy to be in a safe place for them. But I tell them, I think this is the only country in the world where you could come here. I have lived in the Middle East and I don’t think I would have become who I am if I hadn’t been here.

Approximately 123,000 people have flown from Afghanistan and 50,000 are currently undergoing security screening at military bases in preparation for reintegration into American communities.

Tens of thousands of Afghans who worked directly with the US government started leaving the country a few months ago and many arrived after a August evacuation. The majority of these refugees have special visa status which will allow them to clear basic security hurdles more quickly.

The Associated Press reported this week that officials in the Biden administration have started briefing governors and mayors in 46 states of the number of people from the first wave of 37,000 evacuees to be expected in the coming weeks, including more 1,000 refugees expected to arrive in Georgia.

A coalition of Atlanta nonprofits, including New American Pathways, will likely begin helping individuals and their families find housing, employment and other supports soon, as many relocate. in apartments and rental homes in Georgia, primarily in the Metro Atlanta area.

Larger numbers of refugees will go through an even more complicated process as they have yet to apply for permanent status as they seek to pass a more rigorous background check.

Finding enough affordable housing for those allowed to relocate to the United States will be a major challenge that will also benefit from the kindness of strangers. While resettlement groups typically pay a few months of rent, Airbnb provides temporary housing across the country to 20,000 Afghan refugees.

The Biden administration has asked Congress for $ 6.4 billion for the resettlement of Afghan refugees, with targets of 65,000 by the end of September and another 95,000 by September 2022, according to the AP.

Over 90% of people served by American Pathways and other local groups pay their own expenses within six months. There is a strong system of support from the religious community and beyond in the greater metropolitan area and among ethnic groups that depend on each other, said Emily Laney, director of development for New American Pathways.

â€œEven before the 1980 Refugee Act, groups were resettling refugees in Georgia,â€ Laney said. â€œIt’s really so intense. There have been a lot of really traumatic events in the last few weeks, and we have the resources to support them.

â€œThe people who have gone through some of the worst things humanity has to offer, these refugees are strong, resilient and courageous,â€ Laney said.

The amount of resources spent on refugee resettlement has been slashed under the administration of former President Donald Trump through federal policy changes reducing refugees admitted each year to less than 23,000 in 2018 compared to plans last year. year of former President Barack Obama to admit 110,000.

During Trump’s tenure, Muslim-majority countries in the Middle East were among the countries targeted by tighter restrictions hampering the path to a green card.

According to the New American Economy, a nonprofit refugee research organization, Afghans made up less than 2% of the total number of refugees who immigrated to the United States between 2002 and 2018.

The Biden administration has raised its goal of admitting refugees to 125,000 people this year. It’s an unrealistic benchmark due to dwindling resources, but it’s a much better direction than the previous four years, according to Jeremy Robbins, executive director of America’s New Economy.

â€œIt’s our biggest competitive advantage that people want to come here and work hard, but it masks the fact that it’s really hard to do if you don’t speak the language, if you don’t have the network, or if you can find a job by yourself. ” he said.

â€œHaving a big influx of people from Afghanistan right now is something you can expect to have a backlash,â€ Robbins said. â€œBut one thing that’s different now is that I think the circumstances in which this happened, seeing people who risked their lives to help us win this war all of a sudden hanging on the air libre has really brought about a big change that seems to be very bipartisan. “

Georgia Republican Governor Brian Kemp signaled his willingness to take in controlled Afghan refugees shortly after the Taliban took control of their country last month. This contrasts with the stance taken in 2015 by his compatriot Republican and former governor Nathan Deal against the resettlement of Syrian refugees fleeing a bloody conflict in their country of origin.

Witnessing current events was an overwhelming experience for Muska Haseeb, an Afghan refugee turned American citizen, as the Taliban regained control after two decades of sacrificing American troops and treasures and the dashed hopes of Afghans who sought more help. opportunities in their country.

Haseeb’s family moved to Phoenix in 2012 after spending six years in Pakistan as a refugee to escape the physical abuse her mother suffered in Afghanistan for working as an administrative assistant.

Today Haseb’s mother is a social worker and her 27-year-old daughter runs her own fashion business and will soon be starting school at the University of Texas in a pre-medical program.

“I really wish they could do something about this in the future because nobody wants to stay under Taliban rule,” Haseeb said. â€œI’m definitely going to want to be a motivation for any new refugee, whether from Afghanistan or any other country. I want them to see that (the United States) is the land of opportunity and that we can certainly pursue our dreams and goals and that we can become something here.


Clarkston, a town in DeKalb County where more than half of its 13,000 residents were born overseas, is likely to receive an influx of Afghan refugees via New American Pathways and other resettlement agencies in the coming months.

Clarkston became a home town for many refugees, earning it the nickname of Southern Ellis Island. It offers affordable rental housing and is small enough that newcomers can walk to schools or its small downtown area, while still providing enough public transportation to get around Atlanta’s two largest counties. .

Immigrants frequently take on low-paying minimum-wage jobs and other lower-paying positions as they adjust to life in a new country.

For some refugees who settle in Clarkston, this means daily trips to Gainesville to work in the chicken processing plants.

Yet Clarkston’s leadership was not so welcoming to foreign nationals and refugees settling in the city as recently as the past decade.

In 2013, the former mayor of Clarkston helped ban the resettlement of new refugees. A few years later, when Ted Terry was elected mayor, the moratorium was lifted. He has set in motion an attitude of acceptance within government that continues to push the community toward inclusion as more refugees become citizens, vote and run for office.

â€œI think we finally hit a kind of critical mass of voters who were like, in fact, we think refugees are a positive thing. And we don’t want to go back in the history of Clarkston. We want to look to the future and move forward, â€said Terry, who is now DeKalb County Commissioner.

Refugees are known to contribute to the economy of their new country almost upon arrival. Their crime rate in their community is generally low. And they own businesses or attend college at a higher rate than the average American.

Although Kelli lived in a poorer area of â€‹â€‹Clarkston while he was finishing his studies, the town offered an enclave that could have been much worse for a Muslim family who had recently arrived in America shortly after 9/11.

â€œWe always say we got scared more than anything,â€ Kelli said. â€œI think Clarkston was such a loving community that really offered protection from the harassment we might have faced.

With the withdrawal of American forces from Afghanistan now complete, Catholic Charities Atlanta will continue to help evacuated families find new homes, as it has done for the past 20 years.

â€œRebuilding your life is not easy,â€ said Vanessa Russell, CEO of Catholic Charities Atlanta. â€œThese brave families escaped with just what they could take. They are courageous, resilient and optimistic about their future. We will welcome these families with a grateful heart and help them integrate and thrive in their new home here in Atlanta. “