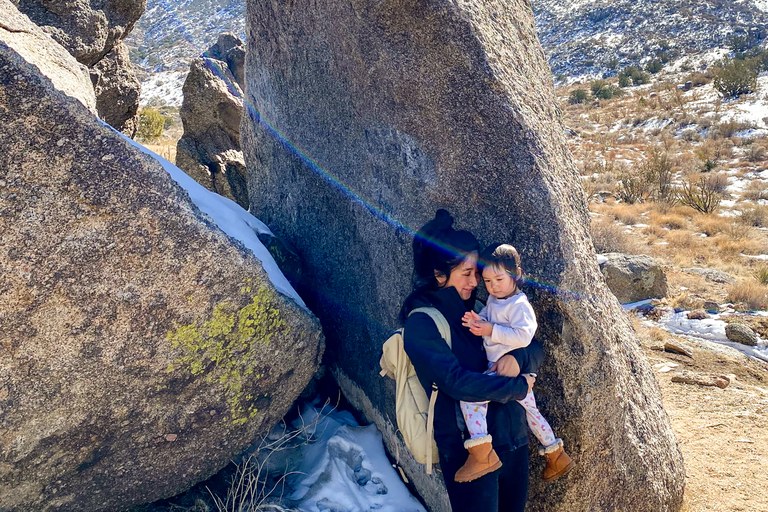 In the mid-1980s, when Kay Bounkeua was a toddler, her family moved to Northeast Heights, a historically white-only neighborhood in Albuquerque, New Mexico. Her parents had moved to the city from a refugee camp in Thailand more than a decade earlier, after war flooded their landlocked home Laos. When neighbors learned that a Lao-Chinese family was moving in, they signed a petition warning that immigrants would bring the crime with them and devalue local real estate. It was one of the many incidents of racial harassment that plagued Bounkeua’s childhood.

Growing up the way she did, worried about discrimination, financial hardship, and feelings of not belonging, Bounkeua enjoyed biking and hiking in the Sandia Mountains with her family. There they could just be themselves. She fondly remembers speaking with her parents in Lao and Mandarin while contemplating the desert landscape. They all found solace outside, she said. They didn’t worry about “speaking bad languages” and “eating bad food”.

In 2010, Bounkeua joined the Asian Family Center in New Mexico, where he later served as Executive Director. She has led initiatives to provide language access to newcomers and has championed community concerns in local and national politics. But over a year ago, she changed careers: she became the New Mexico deputy director of the Wilderness Society, focusing on working with underrepresented communities in the outdoors and in conservation. .

Recently, High Country News spoke with Bounkeua about his transition from social work to conservation, and what it’s like to be one of the few Asians in conservation in the South West. Now that the Biden administration is committed to the “30×30” plan and an inclusive and sustainable future, she believes this is the perfect time to bring diverse community perspectives into the mainstream of conservation. This conversation has been edited for length and clarity.

High Country News: Can you tell me a bit about your past work with the Asian community in New Mexico?

Kay Bounkoua: In 2010, I came to the Asian Family Center as a program coordinator. At the time, it was primarily a direct service provider, providing intervention services to victims of domestic violence. Four years later, I became the managing director. As the organization grew and I dealt with what my family had been through, we created culturally appropriate programs. Just think of those who go from moving to relocating and trying to figure it all out as you build a new home.

I also thought about the future of the organization more from a social justice perspective. As young people who have felt, seen and experienced oppressive actions against our community became more politically engaged, the center has done more organizational and civic engagement work to help members of the Asian community. to exercise their right to vote. We have also started to discuss access to languages â€‹â€‹in New Mexico. In this way, the Asian Family Center not only provided services to people in the community, but also implemented change at the system level.

HCN: Why did you join the Wilderness Society?

KB: Because I had my daughter, who is now 2 1/2 years old. This shift to parenthood got me thinking about the kind of life I want her to have and the kind of world we leave for our children. And I think this connection to land and place is critical.

As for my relationship with the land and what it means, I think a lot about Laos. When I visited Laos when I was little, before even going up a mountain road, we visited a shrine that people created at the bottom of the mountain, where you pray that the mountain spirits ask permission to cross the country. and guides you throughout your journey. This kind of spiritual connection reminded me that so many do have that spiritual connection with places here in New Mexico.

My dad always told me that the landscape of New Mexico is similar to that of Laos in that it is landlocked and warm. This vivid landscape made me feel connected to my parents’ homeland when I was young – but I’m afraid it will fade away and the ways I connected across the land of New Mexico are no longer. available so that I can share them with my daughter.

HCN: How has your past community work inspired your conservation efforts at the Wilderness Society?

KB: To do conservation work, you cannot separate it from community work. We should consider the environment and its impacts on the health of communities as an ecosystem. For example, neighborhoods that have been marked in red have fewer trees and are more affected by heat waves. A higher urban heat index is also correlated with higher rates of violence. All of these contribute to the negative effects on the health of our communities.

HCN: What would you like to see changed in the Wilderness Society under your leadership to address the history of exclusion and discrimination in the mainstream conservation movement?

KB: I hope that we will continue to recognize the deep trauma suffered by communities while proposing solutions found within these communities. How can we examine environmental racism, environmental degradation and the root causes of these problems in our community? How do we invest money in Indigenous, Asian, Latin and other colored communities? For those who continue to be most impacted by climate and extinction crises, I think this is where the magic will happen. And a big part of that job is building trust and relationships, which takes a long time.

There is a lot of harm when we do not include people of color in the decision making process. So we began to conduct a series of 25 different hearing sessions with Black, Indigenous, Asian, Latinx and other people of color leaders and organizations to understand what â€œconservationâ€ means to them and how to make conservation into the realm. New Mexico could be in a respectful relationship with them.

To do conservation work, you cannot separate it from community work. We should consider the environment and its impacts on the health of communities as an ecosystem.

HCN: To achieve a fair and sustainable future under â€œ30×30â€, what should policymakers and environmental organizations in the West do to involve more people of color in the movement?

KB: It is important to note that traditional knowledge and science can coexist. But so many times it feels like you can only do one or the other. If we create policies by looking only at Eurocentric science, it is a huge disservice to things that people have known for generations that could potentially support something that we are working on. And we need to welcome people who have been historically excluded from the environmental conservation movement so that they can give their opinion.

There are so many amazing indigenous led organizations across the state and across the country that we should just follow suit as they were the original and continuing stewards of this land. We can also learn from emerging groups, such as Outdoor Afro, Outdoor Asian and Latino Outdoor. They are so culturally based and understand these issues from a racial equity perspective and can provide many solutions to the issues that we are all trying to solve.

Wufei Yu is an editor at High Country News. Send him an e-mail To [emailÂ protected] or submit a letter to the editor.